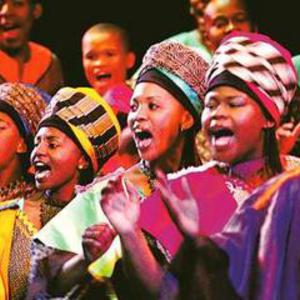 Mixing African gospel with traditional hymns, Jamaican reggae, American pop, and spiritually themed secular songs, the Soweto Gospel Choir are an impressive performing unit. Formed in Soweto, South Africa, in 2002 by choir directors David Mulovhedzi and Beverly Bryer, the group includes 30-some members and the show they produce is a powerful expression of hope and joy full of gorgeous South African vocal harmonies.

The choir was the surprise hit of the 2003 Edinburgh Festival: they were the fourth-highest selling act out of 1,600 acts booked for the festival, putting on extra shows to meet the demand and eventually performing 29 concerts in the space of a month - delighting the reviewers as much as the audiences.

The choir's debut album, Voices from Heaven, appeared in 2005 from Shanachie Records, followed that same year by Blessed, also on Shanachie. African Spirit was released two years later in 2007 on the same imprint.

Live At The Nelson Mandela Theatre