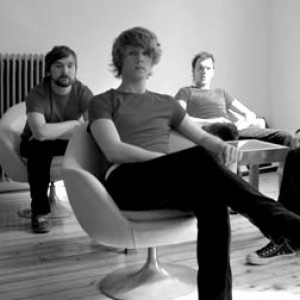 SOUNDS LIKE VIOLENCE convey their white-hot, angsty music with a crushing sense of urgency. A melting pot of emotive sensibilities, they roar, wail and gush melody with the greatest of skill. Their raw, tactile edge is utterly devoid of any kind of preened finish, leaving it stripped to the core and downright gritty, gripping and real. The band have their own way of softening the brash sound they immerse you in, adding a spoonful of sugar to their bitterly performed rocktastic stomp.

Their compelling melodies draw you in with ease, limbs flailing and self-control subsiding as SOUNDS LIKE VIOLENCE's bounding energy shows little sign of being defeated.

Guitar lines whip up storms of nostalgia, nodding their heads in the direction of early nineties American rock, but the band's own take on the brash melodies set them aside from similar acts gracing our airwaves and being unwillingly forced down our throats. Citing their influences as the likes of The Posies to The Afghan Whigs to Kyuss, it's still fair to say that SOUNDS LIKE VIOLENCE have their own thing going on. The jagged music, jarred tones and messy-together sound they produce gratefully infects your very consciousness.

The difficulty they found in pursuing their musical dreams in and around the small town of ?ngelholm, Sweden made them ever stronger, solidified their friendship and led to their pushing themselves and their music harder and harder. Rather than fleeing to the brighter lights and wider opportunities available in Stockholm, the band stuck to their roots and knuckled down in order to get their show quite literally on the road. Sticksman Daniel T. professes that SOUNDS LIKE VIOLENCE will ?tour like idiots, everywhere and always,? so it shouldn't be too long before they're treating you in a nearby setting. These are the boys that will no doubt make hardcore and punk kids strut the dance floor with a new grace and style. - Emily Kearns
*
Lineup

The Devil On Nobel Street

With Blood On My Hands