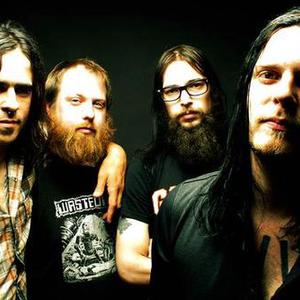 Planes Mistaken For Stars (also known as Planes or PMFS) was a punk rock/hardcore punk band formed in Peoria, Illinois in 1997. They have released music on Deep Elm and No Idea Records. They began as an aggressive yet melodic emo band, all but abandoning the genre before its popularity reached the mainstream. These days Planes has more in common with stoner rock than emo, growing more aggressive and experimental with every record.

They began as an aggressive yet melodic emo band, all but abandoning the genre before its popularity reached the mainstream. These days Planes has more in common with stoner rock than emo, growing more aggressive and experimental with every record.

Lead singer and guitarist Gared O'Donnell started the Peoria, Illinois band with guitarist Matt Bellinger, bassist Aaron Wise, and drummer Mike Ricketts. Shortly after the band self-released a self-titled EP, Wise was replaced by Jamie Drier. At this time Deep Elm offered to repackage and distribute the EP which was re-released in the spring of '99.

In 2000, PMFS took part in a mass migration to Denver, Colorado with more than fifteen friends. After the move, the band recorded their second release for Deep Elm, Knife In The Marathon. In 2001, Planes moved over to Gainesville Florida's No Idea Records to release Fuck With Fire. The next year they released a 7" titled Spearheading The Sin Movement and also made an appearance on Black On Black: A Tribute To Black Flag.

In 2003, Planes saw their second line up change. Jamie Drier left the band and was replaced by Chuck French. Chuck played his first show with Planes on November 2nd, 2003.

Later that year, Planes recorded Up In Them Guts with A.J. Mogis, who's most notable work is with Saddle Creek artists Bright Eyes and The Faint. Up In Them Guts was released in the summer of 2004 on No Idea Records. To promote the record, the band took on one of the lenghthiest tour schedules of their career, covering the United States and Europe with a bands such as The Ataris, Cursive, Against Me!, Dillinger Escape Plan, Hot Water Music and High On Fire on six separate, and very diverse tours. They also made festival appearances at Skate And Surf Fest, Strhess Fest, and Hellfest.

In 2005, Planes completed three additional headlining tours. One in the UK, and two in the US.

Despite rumors of the band signing with legendary metal label Relapse Records, they announced a deal with Abacus Recordings in the fall of 2005. That fall also brought the departure of longtime guitarist and band co-founder, Matt Bellinger, who's currently pursuing an alt-country direction with Denver's Ghost Buffalo. Soon after, a changing of the guard took place, bringing bassist Chuck French over to second guitar and adding new bassist/old friend Neil Keener (Red Cloud West, Git' Some) to the four piece mix.

The late spring of 2006 brought Planes to the city of Seattle, where they recorded, with Matt Bayles, their first full length for Century Media's Abacus Records. Bayles is most noted for his work with Botch, Isis, Mastodon, and Minus the Bear. The new record, dubbed "Mercy", features eleven new songs and was released in October 3rd, 2006.

In 2007, Planes announced that they would be disbanding following a final comprehensive US tour. Their final show was played on February 16, 2008 at the Marquis Theater in Denver supported by fellow local friends Kingdom of Magic and Mustangs &.Madras.

2010 brought rumors that former members of Planes had been looking to meet up and do some collaborating once again. In July it was announced that Planes will indeed be playing a reunion show, with the lineup that recorded "Up in Them Guts", on October 28th 2010 at the Subterranean in Chicago, Illinois. Shortly after this statement was released, it was also confirmed that Planes will be playing October's The Fest 9 in Gainesville, Florida.

Up In Them Guts