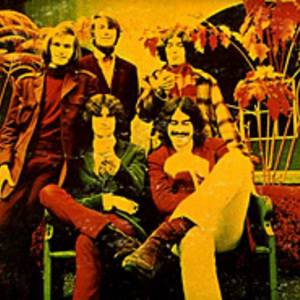 Sopwith Camel was a rock music band associated with the San Francisco psychedelic rock scene of the late 1960s. The band formed in late 1965 and their lineup consisted of vocalist and saxophone player Peter Kraemer, guitarists Terry MacNeil and William Sievers, bassist Martin Beard and drummer Norman Mayell. Sopwith Camel is best known for being the second San Francisco band to get a recording contract with a national record label and the first to have a Top 40 hit.

Sopwith Camel released their first album (and only album recording during the 1960s), the eponymous Sopwith Camel, in 1967 on the Kama Sutra Records label. The band's only hit single, "Hello, Hello", became the first hit title to emerge from the San Francisco rock scene and reached #26 on the U.S. pop music charts in January 1967. The band's first album, and the vaudevillian "Hello, Hello" in particular, had more in common soundwise with earlier songs by Lovin' Spoonful than typical 1960s psychedelic rock; producer Erik Jacobsen produced for both Sopwith Camel and The Lovin' Spoonful. The band was unable to follow up the success of their first album and hit single and disbanded later in 1967.

Sopwith Camel reformed in 1971 and recorded their second album, 1972's The Miraculous Hump Returns from the Moon on Warner Bros. Records' Reprise label. The band broke up again in 1974. Sopwith Camel's debut album has been rereleased twice as Frantic Desolation in 1986 and as Hello Hello Again in 1990.

The Miraculous Hump Returns from the Moon, Remastered 2006 on CD was re-issued by Norman Mayell.

First reissued in 2001 as the Millennium Edition, it is now sold out. The only master that Warner Bros. had in its vault turned out to be a safety copy recorded during the vinyl mastering 30 years before. In this age of digital processing, it became the long awaited CD converted from tape in 2001. But this year (2006), producer Erik Jacobsen, discovered a box of reels from San Francisco's Wally Heider Studios in his basement. Some would say this version is more faithful to the original vinyl recording of 1973. Again re-issued by Norman Mayell at www.sopwithcamel.com.

The Miraculous Hump Returns From The Moon