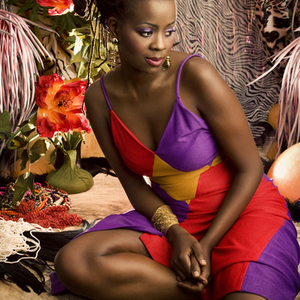 She is a daughter of the New African world. Born in Illinois to East African parents, Somi and her six siblings began to shuffle through the life of a diplomat scientist-cum-university professor's family. Thus exposing Somi to stories and music from all over the world. Her lyrically and musically magnificent new album Red Soil In My Eyes is a soulful celebration of her Rwandese and Ugandan heritage that fantastically speaks of returning Home.

?But where is home?? one might ask Somi, a young citizen of the world. Well, she has found Home? in her music. ?Singing has been a journey of healing,? says the young singer/songwriter of the music she refers to as distinctly New African. ?I want my music to put people in a place of introspective bliss and inspiration. The same place I am when I write. I want people to be touched by music and never be afraid to fully embrace who they are.? Often compared to the great voices of Nina Simone, Miriam Makeba, Dianne Revees, and Sarah Vaughan, Somi's music relentlessly evokes all that is pure, honest, and true. Listening to her exhale a belly full of stories on life, love, and liberation, one is involuntarily reminded of their own private moments of passion. Throughout Somi's songwriting, her voice soars over, through, and in between nuances of an incomparable musicianship that organically fuses jazz, classic soul, African folk, and rare urban grooves.

Having lived in Zambia, Kenya, and Tanzania, Somi was the featured vocalist in the African Globe Theater production of Drums Under the African Sky upon moving to New York City. The early spot led to collaborations with Amel Larrieux, Tsidii Le Loka, Roy Hargrove, Lionel Loueke and Lonnie Plaxico. She gained more attention after being featured in Source Magazine alongside Mos Def and other lyricists involved in a police anti-brutality project entitled Hip-Hop for Respect and in 2005 she shared a stage with Cassandra Wilson at the Blue Note jazz club's New Year's Eve celebration. Emerging as a popular headliner and firm critical favorite, she has performed at Joe's Pub, B.B.King's, and The Blue Note in New York City, the Atlanta Jazz Festival, and Chicago's famed South Shore Jazz Fest, among many other international venues.

Somi recently found time to complete a master's degree at New York University's Tisch School of the Arts, while winning praise from African icons like Hugh Masekela and Cheik Tidiane Seck. She has been profiled in numerous media including CNN International, BBC World, National Public Radio, TV 5 Monde, VH1, MTV, and BET. In 2006 she was invited by the International French Cultural Center to tour 15 African countries. Earlier in the year, she helped the Rwanda Ministry of Culture and World Culture Open to organize the 5th Pan-African festival of Dance in Kigali, Rwanda, while consulting for the United Nations Development Programme's International Conference on Creative Economies for Development. Truly, Red Soil In My Eyes showcases the multi-cultural sophistication of a world citizen, the sensitive, observant soul of an appreciative native of planet Earth, who goes home every time she sings.

What You Waiting For (CDS)

If The Rains Come First

Red Soil In My Eyes