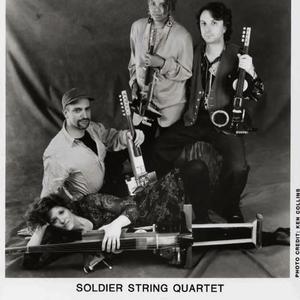 Composer Dave Soldier founded the Soldier String Quartet in 1985, influenced by James Brown and funk, punk rock, and Haydn, and the group was active until about 2000. The group played standing up or walking the stage like the Beastie Boys, usually with Michael Suchorsky, a drummer for Lou Reed, performing throughout the USA and Europe, both at Carnegie Hall and Lincoln Center and CBGBs. Their first CD, Sequence Girls (1988) featured Soldier's compositions including the title track based on an early rap song, and transcriptions of three Delta Blues.

Their first CD, Sequence Girls (1988) featured Soldier's compositions including the title track based on an early rap song, and transcriptions of three Delta Blues.

An album of blues transcriptions followed in 1992 (She's Lightning When She Smiles), two CDs with flutist Robert Dick (Third Stone from the Sun, with Hendrix transcriptions and Jazz Standards from Mars, with arrangements of Eric Dolphy and others).

Finally, in 2000, they released Inspect for Damaged Gods.

The Soldier String Quartet toured and recorded with John Cale of the Velvet Underground from 1992-1998, appearing on many recordings with him, as well as records with drummer Tony Williams, Guided by Voices, Phill Niblock, Nicolas Collins, and premiered works ranging from Xenakis to Elliott Sharp (for whom they recorded 5 CDs). Players included Dave Soldier on second violin, Regina Carter, Laura Seaton, and Toddy Reynolds on first violin, Ron Lawrence and Judith Insell on viola, Mary Wooten and Dawn Andrews on cello, Michael Suchorsky on drums and Ratso Harris on bass.