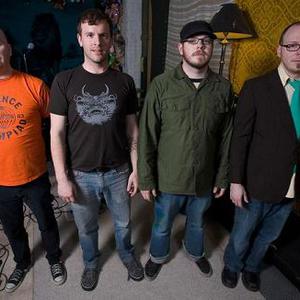 Smoking Popes is an American punk band from Chicago, Illinois, formed in 1991. They play pop-influenced punk music with crooning vocals and romantic lyrics. The core of the group is composed of brothers Matt Caterer (b. 1968), Josh Caterer (b. 1972) and Eli Caterer (b. 1975). The Caterer brothers were raised on rock 'n' roll and crooners like Tony Bennett and Frank Sinatra. In 1980 Matt got a guitar, Josh a bass guitar and Eli a drum set and they began to play together. Soon after, their eyes were opened to the world of the Ramones and punk rock.

The Caterer brothers were raised on rock 'n' roll and crooners like Tony Bennett and Frank Sinatra. In 1980 Matt got a guitar, Josh a bass guitar and Eli a drum set and they began to play together. Soon after, their eyes were opened to the world of the Ramones and punk rock. Other early musical influences included Mel Torm?, Tom Waits, The Replacements, The Smiths, early AC/DC, The Cars, and Dinosaur Jr.

In 1990 Matt and Josh, calling themselves Speedstick, got a gig at a party and played approximately 10 original punk-style compositions. About this time, Matt switched to bass and Dave Martens joined as drummer. Josh became an Elvis Costello fan and his style, accordingly, became more pop influenced. Speedstick recorded 10 songs in their first studio session, including "Brand New Hairstyle," which would become a staple of the Smoking Popes repertoire.

They changed the band's name, taking "Smoking" from Matt and Josh's penchant for excessive cigarette smoking and "Popes" from the movie "The Pope of Greenwich Village." (The band's original name was simply the "Popes", but it was decided to add the adjective to distinguish the band from the Chicago gang The Popes.)

Martens, disenchanted with the band's musical direction, stopped attending rehearsals and the Caterers recruited Mike Felumlee of Article One to replace him.

In 1991, the band released five tracks recorded during their Speedstick days as the Innoculator EP, with local indie label Radius Records. With the proceeds and what other funding they could scratch together, the Smoking Popes bankrolled the recording of the Break Up EP in 1992. In February Eli Caterer joined as a second guitarist and in October Break Up was released. They played as often as possible in the Chicago area and ventured occasionally to small venues in Indiana and Tennessee.

In 1993 the band recorded their best-yet compositions on the 2 EP. They also recorded a split 7" single with Groovy Love Vibes. GLV vocalist Erik Pertl guested on the Popes' track "Leather and Lace" and Josh guested on the GLV track "Goodtime Music."

The band got a break when pop punk icon Ben Weasel of Screeching Weasel became a fan and used his connections to recruit Mass Giorgini of Squirtgun to produce the Smoking Popes' first LP, Get Fired. With their improved status, the band scored a three-week tour with The Bollweevils and played to bigger audiences.

That year also saw the release of two Popes tracks from the same sessions as the Break Up EP. "Run Away" and "Let's Hear It for Love" appeared on the "It's a Punk Thing... You Wouldn't Understand" compilation on Shakefork Records.

For the follow-up to Get Fired the band worked with producer Phil Bonnet, who also produced much of their early material. "Need you Around," which would later launch Smoking Popes to a huge audience via the soundtrack to the movie Clueless, was recorded in December.

In early 1994 the band opened for Green Day, who extended the invitation after hearing Get Fired. In mid-1994 the Popes finished their new album, Born to Quit. After "Need You Around" took off on alternative radio, they opened for Elastica and gained the attention of record label scouts. They signed with Capitol Records, which rereleased Born to Quit. In a promotional blitz, they toured America with the Goo Goo Dolls and Tripping Daisy.

In 1996 The Clueless soundtrack was released in the UK and "Need You Around" was dropped as a single to capitalize on their newfound popularity there. It was promptly designated "Single of the Week" by the New Musical Express. They toured England and Scotland for a couple of weeks, then crossed back over the Pond to tour with Jawbreaker.

Despite the touring, album sales didn't meet Capitol's expectations and it became clear that the band had to deliver a hit. Producer Jerry Finn, who had added gloss to the sound of Green Day and Rancid, was brought in to do the same for Smoking Popes. In September they toured with labelmates Jimmy Eat World.

The start of 1997 brought dissatisfied label execs who insisted they didn't hear a single among the tracks Smoking Popes submitted for the new album. The band spent six months writing and demoing songs until Capitol was finally determined that new song "I Know You Love Me" had commercial potential. However, the label fired the Popes' A&R representative and the new album was shelved.

After negotiations, Destination Failure was released in August. At this point Tom Counihan, a.k.a Tom Daily, joined the band as a touring guitarist. In October they began to tour with alternative icon Morrissey, who said of Born to Quit, "[it's] extraordinary, the most lovable thing I'd heard in years."

Album sales picked up and the band garnered new fans at every stop. Still, the label couldn't be convinced to devote significant resources to promotion.

In 1998 the band toured with Triple Fast Action and Menthol. Afterward, the band decided to record a covers album, which would fulfill their contract with Capitol.

Around this time Josh became very involved in Christianity and wanted to devote his work to his faith. The label rejected the new album but released Smoking Popes from their contract. The band played several large shows before Josh quit, effectively breaking up the band.

In a later interview, Josh commented about this time "I became a Christian in May 1998 and I quit the Popes in January 1999. I tried to incorporate my faith into what we were doing in the Popes, but it just didn't seem like a good fit."

In 2001, record label Double Zero finally released the covers album The Party's Over.

In November of 2005 the Smoking Popes reunited for a packed and much-anticipated show at the Chicago club The Metro with Rob Kellenberger replacing Mike Felumlee on drums. The tickets sold out in a mere 36 minutes. In that show ? immortalized on a DVD called At Metro, bundled with a CD of the performance ? Josh, Matt and Eli were conspicuously happy and energized. Eli remarked that he hadn't had that much fun in seven years, a reference to the time since the band's previous break-up. Josh has become somewhat more accepting of much of the music of his former band, and the Popes have decided to reunite on a permanent or semi-permanent basis. They embarked on a U.S. tour in early 2006 with the band Bayside. Several older, pre-1999 songs in the band's repertoire Josh retired from their set list, owing to their expression of views incongruent with his Christianity. During this time, the Popes have acquired a new drummer, Ryan Chavez, who replaced Kellenburger, who had prior commitments. Chavez now seems to be the permanent replacement. During August 5th of Lollapalooza 2006 in Chicago, Josh introduced and played two new songs which he announced would be on the forthcoming Popes album, though no release date or album title was given. The new songs, entitled "If You Don't Care" and "Stay Down", are now available to hear on the band's MySpace page.

This Is Only A Test

It's Been A Long Day