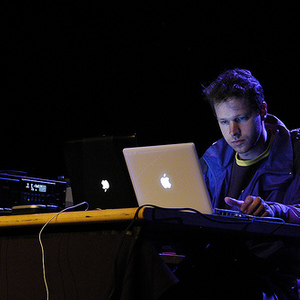 Formed in Australia, 1992 - the (then) three members, Darrin Verhagen, Charles and Fran&ccedil;ois T&eacute;taz seeing the band as a vehicle for pursuing their musical interests. Their debut CD Bloody Tourist reflected this range, traversing ambient, ethnic, rock, funk and industrial styles. Seen by some critics as a swipe against the tasteful world music fad gripping the chill out rooms and tofu burger bars, Bloody Tourist set the blueprint for the band's lack of preciousness regarding genre "swing and mesh".

Their follow up recording The Scribbler was commisioned as a soundtrack for a stage performance based on Kafka's The Trial - and as would be expected by the subject matter, Verhagen's score shied away from the playfulness of Bloody Tourist, instead exploring the neoclassical minimalist school as expounded by Wim Mertens, Michael Nyman and Philip Glass.

The Witch Hammer kept the orchestral focus, but also moved into a more gothic territory - originally crafted as a homage to 20's German expressionist film, and the 15th century supernatural.

Succulent Blue Sway was released in late 1994, as a side project. Composed for the Vis a Vis (Canberra) dance company's production - which explored the effects of technology on the senses - it shifted musical emphasis to the areas of ambient techno and industrial dance. It also established the pseudonym "Professor Richmann" for Verhagen's more techno-based releases.

The Witch Hunter continued the descent into the nightmare world of Mediaeval superstition and vengance. East European violin, reflective passages of brooding ambience and occasional moments of hope, were undercut by sheer orchestral violence and a chillingly bleak filmic soundscape.

Continuing the curiosity with different genres, future projects for Shinjuku Thief include more ambient industrial material (in collaboration with the Japanese experimental sound artist Ryoji Ikeda), '70's funk rock, a follow up to Bloody Tourist, as well as the completion of the Witch Trilogy.

Darrin Verhagen continues as the mainstay of the band involving different artists for each new work. He has also composed material for film. These credits include an AFI award nominated episode of The Web [AUS], the Raw series of interviews [AUS], Fabian Klatura's The Cleaner [Germany] and Iara Lee's Synthetic Pleasures [America].