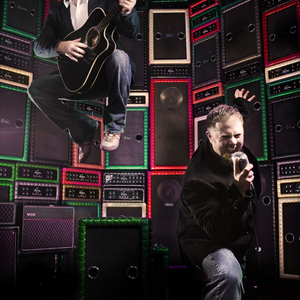 Shane & Shane are a Christian band known mostly for their praise and worship songs and recordings. The band consists of Shane Barnard and Shane Everett. The pair used to lead worship at Breakaway Ministries at Texas A&M University. After putting out an album or two, they started doing the recording and touring full time. By God's grace and gifting, they've put out a lot of music. Their aim is that their music would worship God and encourage others to love God more. Shane Barnard

Christianity began to play an active role in the life of Barnard when he was in ninth grade, when he began to attend a Bible church youth group. He began leading worship soon thereafter. During his junior year as a student at Texas A&M University, Barnard began a recording career.

Prior to joining Everett, Barnard teamed up with friend Caleb Carruth to release an album. Entitled "Salvation Still Remains", it was released in limited numbers. Barnard and Carruth were rumored to have recorded the album in only two days due to the fact they had to pay for studio time themselves and wanting to make the most of it. Family and friends brought them sandwiches and drinks through out the process. Barnard and Carruth later agreed to end their partnership amicably, stating "they were just moving in different directions".

Everett was born in Dallas, Texas and later moved to Garland, a nearby suburb. Everett also attended Texas A&M University. After playing in a bar band, 4D2, one night Everett experienced an encounter with God which led him to Central Baptist Church, where he became a Christian. Shortly thereafter, he met Barnard, and became part of a weekly student-led praise and worship service at Texas A&M.

The band originally began with Barnard performing solo acts, but Everett increasingly played a major role in his performances. With the release of their 2003 album, entitled Carry Away, the band became officially known as Shane & Shane.

Johnson started as a guitarist for Todd Agnew. After Agnew moved to Memphis, Tennessee, Taylor stayed behind and played the guitar for the Robbie Seay Band. When Robbie Seay Band went on tour with Shane & Shane during David Crowder Band's "A Collision Tour", he played guitar for both, staying on with the new group. Taylor later went full time with the David Crowder Band, and is now back with Shane & Shane.