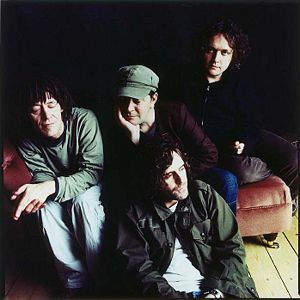 The Shack story is one of music's greatest legends, a tale of such woe and wonder it defies exaggeration. It incorporates hardship, bereavement and chaotic misadventure, but above all it tells The tale of beautiful music triumphing over trouble and tragedy. And that's where we begin: with the beautiful music. In the '80's, the two brothers from the Kensington area in Liverpool were singer and guitarist with The Pale Fountains, an effervescent pop group who were signed to Virgin for the ridiculous (in those days) sum of ?150,000 and commercially imploded under the weight of two albums in 1986.

In the '80's, the two brothers from the Kensington area in Liverpool were singer and guitarist with The Pale Fountains, an effervescent pop group who were signed to Virgin for the ridiculous (in those days) sum of ?150,000 and commercially imploded under the weight of two albums in 1986. The adventure cost much more than money though, when bassist and Mick's best friend Chris McCaffrey died of a brain tumour.

The Heads returned in '88 as Shack and a debut album 'Zilch', an album artistically murdered by the production techniques of the times. Three years passed. In 1991, Shack made 'Waterpistol', an inspirational guitar jewel filtered through a haze of E and cocaine, an album that would've proved just as influential as any British album made in that era had the studio not burned down, taking the master tapes with it. One tape remained, but it vanished in the producer's car on a trek across the States for two months and when it turned up the label had folded. Four more years passed, but by the time it was finally released on Marina - to universal critical hosannas - it had developed "lost classic" status only.

The Heads battled on. They toured as their hero Arthur Lee of Love's backing band. In '97, they created a new group called The Strands and recorded the delicate, dreamy masterpiece 'The Magical World Of The Strands', a record of such magnificence they were once again courted by majors and signed to Laurel, through London. They spent a long time making another classic, 'HMS Fable', and then decided that next time they wouldn't take quite as long recording. Enter North Country. Enter 'Here's Tom With The Weather'.

"The journey we've had together has been beautifully turbulent," laughs John. "But there's times when we glide and we're gliding forward now."

Mick agrees. "Making this album has been frantic, chaos, carnage, intense: the normal way with us. But it doesn't sound like that. That's all matters. The story is what it is. But so are the songs and so are the records. Because we're good."

Nobody could disagree with that.
(Just to add that this is merely a condensed version of shacks biog on their homepage)

And to add to the above heres a little important news from shacknet.co.uk:


SHACK will release their 4th studio album ?? The Corner Of Miles And Gil' on Noel's label Sour Mash Records on the 15th May 2006 and will release a limited 7? and download only of the track Tie Me Down on the 1st May 2006. SHACK recently supported Oasis during their recent UK shows and will be headlining their own tour in the UK in May. For more information on SHACK and the bands tour dates check out their website: http://www.shacktheband.com, http://www.myspace.com/shacktheband, http://www.shacknet.co.uk or http://www.michaelhead.co.uk

On The Corner Of Miles And Gil

Here's Tom With The Weather