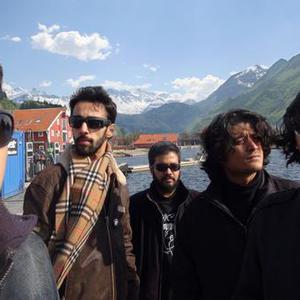 There is more than one artist with this name: 1) A New Zealand hip hop rapper. 2) A hardcore band from India. #1 Malo Luafutu (born on May 29, 1979 in Christchurch) better known by his stage name Scribe, is a New Zealand hip hop rapper and recording artist of Samoan descent. His debut album, The Crusader, was released in 2003 in New Zealand where it has since gone five times platinum, achieving two number one singles

#1 Malo Luafutu (born on May 29, 1979 in Christchurch) better known by his stage name Scribe, is a New Zealand hip hop rapper and recording artist of Samoan descent. His debut album, The Crusader, was released in 2003 in New Zealand where it has since gone five times platinum, achieving two number one singles

He became more widely known throughout New Zealand with his guest appearance on P-Money's Big Things album. However he was still fairly unknown until the release of the double sided single "Stand Up"/"Not Many" in August 2003.

#2. Niraj (ex-PDV, Chaos Theory), Srinivas (ex-Chaos Theory), Vishwesh (ex-Split) and Prashant (Exhumation) comprised the original 2005 line-up, making appearances in and around their hometown (Mumbai). Soon after the release of their debut EP entitled 'Have Hard. Will Core' (on Demonstealer Records) in August 2006, Akshay (Skincold) joined in on guitars and completed the arsenal for their attack.

That was the one common thread that ran through all five musicians that make up Scribe. Drawing inspirations from the legendary bands like 'Sick of it All', 'Hatebreed' and the new revolutionary artists like 'The Dillinger Escape Plan', 'Sikth' and 'Walls of Jericho', the band takes pride in being the torchbearer of 'Hardcore' in India.

Subsequently, the band released their first music video for the song 'One Wing Pencil' on YouTube, and is currently fulfilling censorship formalities before they can broadcast it on television. Incidentally, this video was created entirely on their own, with no sponsors or external funds. They now spend their time in the studio putting together their first full-length debut album.

Having toured across Delhi and Pune, Scribe is waiting to explode somewhere near you.
Just about any second now.

31st- august -08 the band launched their album "Confect", it was distributed for free at I-Rock 08 at mumbai. The album is available for download on their myspace and reverbnation page.

Scribe signed up to the record label Grey and Saurian in August / september of 2009 and teamed up with one of the best producers from the country Anupam Roy to work on the new album. The album aptly titled " Mark of Teja" is a concept album and a tribute to the cult Hindi bolywood movie "Andaaz Apna Apna". It was recorded and produced at around February of 2010 and the the band played at the famous Inferno metal festival at Norway on 31st march 2010 and launched the album there.

On 15th of May the band is playing at the Summer Storm festival in India, where the album will be officially out in India.