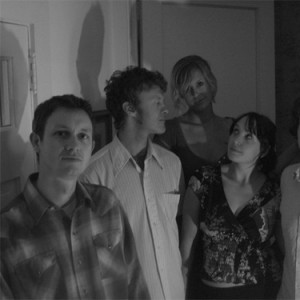 Schooner is band that plays ramshackle pop and experiments with simple song structures from their home in Durham, NC. The line-up includes Reid Johnson (songwriter, vocals, guitar), Maria Albani (bass, vocals), and Joshua Carpenter (drums), but has included a rotating cast of musicians on past releases. They have released three recordings under Pox World Empire based in Durham, NC; You Forget About Your Heart, the unconventional (Pox's collaborative 3 x 4 release), and Rocky P.

EP, as well as appearing on Pox's Compulation 1 sampler plus another full length Hold on Too Tight with 54?40' or Fight!. Their last release, "Duck Kee Sessions," can be found exclusively on Cytunes.org, with all of the proceeds going to cancer research. Schooner is currently finishing a full length, scheduled to be released in early 2012.

The Philler; Schooner: Hold On Too Tight
"When it comes down to it, Schooner sound like Schooner. Their songs are beautiful. "Married" is three minutes of country heartbreak and it moves straight into a Pet Soundsy number called "They Always Do!", which builds to a beautiful chorus ending, and gives way to two-and-a-half minutes of fuzz-pop glory called "I Would Tell You That I'm Stuck". Everything they do well (and they do everything well) is put together to create an aching meditation..."

(Note: this "Schooner" is not to be confused with the Montreal band of the same name.)
Another

You Forget About Your Heart