Scenes From A Movie 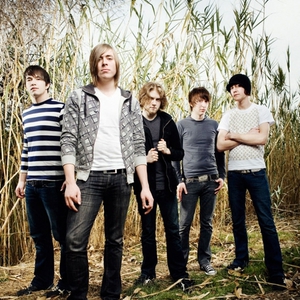 Just like a scene from a movie, the timing just isn't always right for two people. When Tony Bush and Jon Ewing met in high school in Charleston, West Virginia, they played in a few bands together, instantly struck by the symmetry between Tony's vocals and Jon's guitar riffs. But college intervened and the guys went their separate ways -- Tony off to Bowling Green and Jon sticking closer to home, attending the University of Charleston. Both expected their musical enterprises to go their separate ways.

"I thought the whole school situation sucked," says Ewing. "I thought, 'I don't want to do this! I'd much rather do music!' I wanted to start a band and I wanted to actually get serious with it." Jon met someone else to play with, a guy named Luke Delpapa, who was a fellow guitar player. They got together to write songs and start a band, but the two guitarists weren't much more than melodies without rhythm or harmonies. "We needed a singer. Or a bass player. Or both," laughs Ewing.

Testing out bass players proved frustrating, but more aggravating was not being able to find a singer who fit their pop-punk mentality. Their only gig was an appearance on the back of a parade float. They knew they needed a front man. Now. Suddenly the timing was right for Tony -- with a little push from Jon and Luke. "The only person I knew who could play bass and sing was Tony," says Ewing. "I pretty convinced him that quitting school and coming back to play in a band with me was a great idea."

On the last day of Ewing's freshman year, school finally paid off as he met their drummer, Jared Miller. Scenes From a Movie was born...sort of. The boys finally recruited a fulltime bassist, Adam Triplett, because, as Bush unapologetically acknowledges, "I'm just not good enough as a bassist." Their lineup was complete. Scenes From a Movie made the rounds playing with bands like The Starting Line, Midtown, and Boys Like Girls before scoring a coveted spot on the 2007 Warped Tour. These late-teen, early-20's pop punkers recorded their debut album The Pulse with Marc McCluskey and Mike Green, inspired by the hard thrashing bands of their youth -- "I listened to a lot of Metallica, NOFX, Black Flag, The Ataris," says Ewing, "But when I discovered Green Day I thought it was the sweetest thing on the face of the Earth."

Scenes From a Movie is chock full of sure-to-be-hits songs, penned mostly on Bush's acoustic guitar then plugged in giving their songs an intricate, but amped up quality. "Most of the lyrics aren't totally literal to something that happened to me," says Bush, "But they are inspired by something that did." But Scenes From a Movie isn't just about Girls (the assaulting pummel of "The Cover Up"), Girls (the highly danceable, piano infused "If It's My Game Then I Can't Lose"), Girls (the 80's synth-tinged semi-ballad "Goodbye Reckless").

"I wrote a song about dying called 'If I Die'," says Bush. "When you listen to it, the lyrics are super literal, but it was inspired, kind of, by a family member that died. I've been trying to tackle all sorts of topics on our songs -- not very happy topics, mind you." Still, this ain't emo. "They're not whiny sad songs. I'm singing about sad topics, but in a way where you can feel positive about them." The pop-punk stylings, fast rhythms, and don't-mess-with-us vocals of Scenes From a Movie are sure to garner the attention of fans of bands ranging from Fall Out Boy and Panic! At the Disco to Alkaline Trio, but the release of their hot debut is hardly the final page of the script.