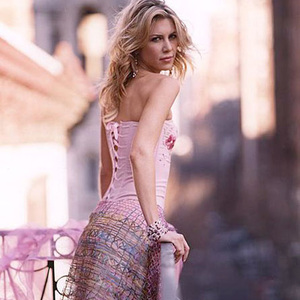 Sasha Lazard is one of the most innovative and extraordinary talents on the international music scene, pioneering an exciting musical fusion of classical art songs, Russian folk tunes and opera arias with contemporary rock and electronic beats. An accomplished soprano, Sasha received her vocal training at the San Francisco Conservatory of Music. With an edgy sophistication and an artist's desire for freedom, Sasha eventually rebelled against the constraints of the tight-laced opera scene, and left behind her established career as a classical performer.

An accomplished soprano, Sasha received her vocal training at the San Francisco Conservatory of Music. With an edgy sophistication and an artist's desire for freedom, Sasha eventually rebelled against the constraints of the tight-laced opera scene, and left behind her established career as a classical performer.

She began collaborating with pop producer Frank Fitzpatrick and redefined her performance. She unveiled her new sound at top venues in New York and Los Angeles, and performed for over 8,000 people in Europe's largest nightclub, Club Privilege in Ibiza, Spain.

She received overwhelming acclaim from U.S. and European club audiences and was soon asked to record the theme song to the film Princess Mononoke; the critically acclaimed, Holy Smoke, starring Kate Winslet; Modigliani, starring Andy Garcia; and most recently, the end credit song to Kettle of Fish starring Mathew Modine and Gina Gerson. Her song ?Miles Away? was chosen as the theme song for the 2005 Toronto Film Festival. Her alluring rendition of ?Angeli? was featured in Victoria Secret's Fall 2006 campaign.

Sasha sings for top designers and celebrities at events like the re-opening of Bulgari's flagship store in Beverly Hill's, and for the launching of their new jewelry lines in Cannes, Paris, Basel, Sao Paolo, Rome and St. Petersburg. She performed for Maserati at The Four Seasons, and different fashion designers including Caroline Herrera and Richard Tyler, Max Mara, and Narciso Rodriguez. Sasha's most recent appearance was for the Whitney Museum's annual charity gala this past October.

Sasha Lazard's debut album, The Myth of Red, was released on Higher Octave Music//EMI and made a remarkable impact on Billboard's Hot Dance Chart and Billboard's Classical Crossover Chart. Sasha has completed an acoustic CD entitled ?Moonfall? which is available on CDbaby.com/sasha Lazard. She is at work on a follow up album to The Myth of Red, working with producers BLISS and collaborating again with Frank Fitzpatrick and David Tobocman. The EP will soon be available on CD Baby.com.

Sasha most recently recorded a duet album with soprano Shawna Stone entitled ?Siren? for Manhattan Records/EMI. SIREN was produced by Peter Asher and Frank Fitzpatrick and will be released on March 5, 2007. Sasha and Shawna will be appearing in March in a PBS special entitled ?Heavenly Voices.

The Myth Of Red