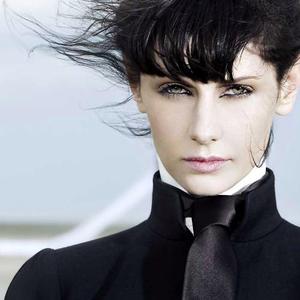 Born in Paris in 1974, Emma recalls as a young girl she was far too shy ?even to make a noise let alone to sing? and her family were not particularly musical. But her musical passions were aroused at the age of eleven when she heard the Queen Of The Night from The Magic Flute. It was a moment of transcendence, although to her amused embarrassment, Emma admits this introduction to the world of opera and bel canto came via a television commercial. Nevertheless, a life-long love affair was forged. "I ran to my bedroom and tried to sing the tune immediately.

That's when I fell in love with singing for the first time," she says. "I knew then I wanted to sing like that. That was the music that touched my soul."

Unsure at first how to pursue her desire to sing, it was not until she was 14 that Emma met a teacher who could help realise her dreams. "She was a little old lady, about 70, and in her day she had been a great singer. She surrounded herself with candles and cats and her piano and I loved the whole atmosphere,? Emma remembers. ?I touched these great scores for the first time and read the Italian words which seemed to have a mystery and romance." She also told Emma that she was a soprano coloratura. ?Singing was still like playing with a toy to me. She found my voice and slowly started to bring it out."

Emma took lessons with her for two years and was convinced she had found her purpose in life. But she was also approaching an age when her parents were concerned about career prospects and her future. "They didn't think singing could ever be a proper job," Emma recalls. "My father was a policeman and thought that maybe I should follow in his footsteps. My mother was a secretary and she thought that would be a good job for me. I understand why they wanted me to concentrate on my other studies. But to me singing is an affirmation of being alive."

She continues to pay tribute to her early teacher but has never seen her since. ?I still feel guilty about stopping,? she explains. All great singers will tell you that the voice is a gift, and not being able to use that gift left Emma feeling hollow. "I didn't know what I wanted to do. But I felt I had done something wrong. I felt all bottled up. If I don't sing I explode," she says.

Her desire to sing did not go away and was soon to re-emerge in a radically different form when she joined a heavy metal band. "Some guys in my class were forming a rock group and they were actually looking for a male singer," Emma recalls. "They wanted someone who could scream, so I said I could do that." Her offer was gratefully accepted and for the next two years she abandoned her operatic scales and exercises and smoked two packets of cigarettes a day to give her voice a rougher, rock inflection.

Yet although she enjoyed the screaming, she began to miss the music of the opera. One day a friend of her mother's took the young rock singer to a performance of Mozart's Don Giovanni at a Parisian opera house. It was the first time she had ever seen an opera on stage and she was entranced. "I thought after hearing something so beautiful I had to die," she recalls. "We had seats on the balcony and I remember wanting to jump off it and fly."

She began once again looking for a teacher and enrolled at a music school. Yet she found the style of teaching cold and formal, and soon took off with a friend for New York. "While I was there I sang some r&b, which in a way has a similar power to opera. It's very earthy and it's contributed a lot to the way I approach singing today," she says.

When she eventually returned to France, she again resumed singing lessons. But by now she had decided she didn't want to go into opera, particularly after one teacher had accused her of introducing a groove into her delivery of a famous aria. "That set me thinking I should find my own ways of expression and use my voice to invent something of my own."

A chance meeting at a party with the French composer and pop star Jean-Patrick Capdvielle gave her the opportunity. They had met before but with an audacity she still wonders at, she asked him to write an album for her. "But I'm not Verdi," he told her. "And I'm not a proper opera singer so we should do something together," she replied.

Her boldness clearly made an impression for a week later, he rang her and they began working together. "There was this perfect moment when it was so evident it was going to work," Emma says. Indeed it worked so well that the resulting album Carmine Meo, released in 1997, has now sold in excess of two million copies. The album roared to the top of the French album charts, selling 100,000 copies in its first three months and earning Emma her first of many gold discs. That success was soon echoed on the international market, as Carmine Meo rose to the top of the charts worldwide, often overtaking albums by the likes of C?line Dion and Madonna.

But whereas most of the writing on Carmine Meo had been done by Capdvielle, for her second album Emma was determined to write her own material. Signed to a new label, Ark 21, she began to look around for a new musical collaborator. Miles Copeland, head of her new label, recommended Graeme Revell, a composer whose work had appeared on the soundtrack to the Red Planet movie. It proved to be a perfect fit. "In his music I found an echo of what I was looking for," Emma says.