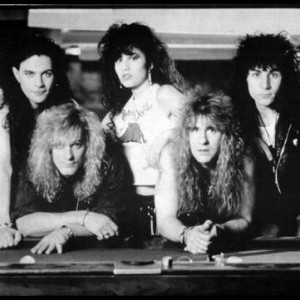 A melodic and polished mainstream rock band, reinforced with the strong female vocals of New Jersey native Sandi Saraya. Formed in New Jersey by vocalist Sandi Saraya and keyboard player Gregg Munier and originally travelled under the title Alsace Lorraine. They changed the name to Saraya and travelled to Los Angeles in an attempt to make it big. However the stint in L.A. was short-lived, and the band returned home broke and disillusioned.

The group then met Sandy Lizner, who would become their mentor and collaborator, introducing them to management and the record company executive that would later sign them. Saraya and Munier wrote material for the debut album over the next year, realizing in this time that there had to be a change in the band. The final piece of the puzzle was when Tony Rey Bruno (guitar, ex-Danger Danger), Gary Taylor (bass) and Chuck Bonfante (drums) auditioned and rounded out the new Saraya line-up. The debut album had minor hits with "Love Has Taken It's Toll" and "Back To The Bullet".
Internal disputes and dissatisfaction with musical direction led to the departure of Munier and Taylor in 1990. Bassist Barry Dunaway (Yngwie Malmsteen and Joe Lynn Turner) was recruited for the less successful sophomore effort. The album was basically recorded without a keyboard player, as John Riggio was brought in for the accompanying tour. A third album was rumored to be recorded, but never released, and the band quickly disappeared.

When The Blackbird Sings...

When The Blackbird Sings