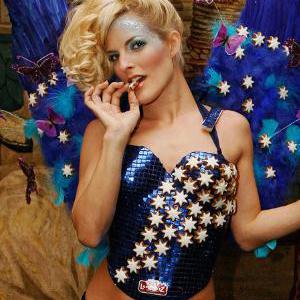 
(1) Sandy M?lling (born 1981), known professionally as Sandy, is a German singer-songwriter, dancer, television presenter and occasional actress, who rose to fame as one of the founding members of the successful all-female pop band No Angels, the "biggest-selling German girlband to date," according to the German media.
After a series of commercially successful releases with the group between the years of 2001 and 2003, she launched a solo career which produced two studio albums, Unexpected (2004) and Frame of Mind (2006), and a number of top ten hits, resulting into an ECHO Award nomination for "Female Artist National."
In 2000 she debuted as a member of the band No Angels (the first band casted in Germany). No Angels became the most successfull Girlband of Germany. in 2003 the No Angels breakup and Sandy started her solo career. 2004 till 2006 she released two albums "Unexpected"(2004) and "Frame of Mind"(2006).
And she released the following singles: "Unnatural Blonde" (2004), "Tell Me" (2004), "Unexpected" (2005), "Crash" (2006) and "Living Without You" (2006).
She also recorded two german songs for the "Bambi" soundtrack and the titelsong "Through Your Eyes".
In 2007 the No Angels planned a Comeback, but the members will also continue the solo careers.


(2) Sandy Band
Shahram Azar (Shahram Khosroshahi Azar) was born in second of Mordad equal to 24th of July in Bavarde area in south of Abadan.
Since the Islamic revolution in Iran Shahram had been arranging music & in 1984 he immigrated to Germany
With his family & continued his work there. In Germany & with the idea of Behzad Pishrow , he has made Sandy Band.
He immigrated to the U.S. in 1995, now he lives in Bakersfield area. Singing , arranging songs , write poem & song are the works that Shahram Azar does in Sandy Band.
And he also taken into one of the best keyboardists of Iran.

Music producer Behzad Pishrow was born in Abadan, he is playing drums, started when he was 6 years old. His first teacher was his brother & then his following teachers they were Rahro Ahmadi brothers. Behzad also graduate in drums academi Behzad is Sandy's founder with his great friend Shahram Azar they build up Sandy's group.

Khashayar Azar was born in 1983. It's about 6 years that Khashayar has cooperation with the Sandy's group, he started his activity with Playing the keyboard & singing - he made different songs for himself & Sandy Band.

(3) Sandy was born in Egypt (Cairo) in 22 April,she studied tourism and hotel management in Alison academy for 4 years.

Sandy's first single was a big success and its musical quality wasa big step ahead in her musical career.

Sandy's second single was ?Hamoot Alik? lyrics by Khaled taj eldeen and composed by Housam Badran.Also directed by Younis,this video clip was followed by an extended club remix of the smash hit ?Hamoot Alik? remixed by Tammim and redirected by Younes with a different vision of the original clip

Sandy is more than just a rising talent.She has surpassed expectations and risen above the rest of her generation,Sandy has marked the musical scene with her unique style,now,and for the coming years.