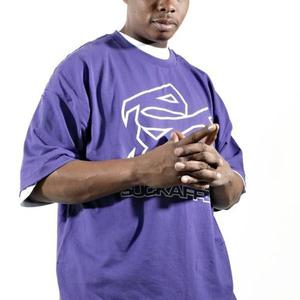 San Quinn (Quincy Brooks IV) was born in Oakland, Ca. on October 24th and later moved to San Francisco at age 3 to San Francisco's Fillmore district. Like so many other rappers, he began rhyming to stay out of trouble. He was raised in the same neighborhood as many well known names like Rappin 4-Tay, JT the Bigga Figga, Seff Tha Gaffla, D-Moe, Hugh-E-MC, Messy Marv, and Andre Nickatina just to name a few.

Quinn was signed to Get Low Records at the tender age of 14 and released his first song "SFC" with GLP and RBL when he was 14. His first album entitled "Don't Cross Me" under Get Low/Buck Fifty Records followed shortly thereafter when he was a freshman in high school. The genesis for his current stardom began, Quinn went on to work with Master P and was featured on West Coast Bad Boyz 1 & 2, both of which have been certified Gold. Quinn dropped "Live N' Direct" which featured the smash hit "Come on in" under Get Low Records in 1995.

He jumped right back in the studio and recorded "The Hustle Continues" under Get Low/ Priority Records. At age 18, Quinn had been featured on multiple Gold Certified albums, put out 3 solo albums, and was part of the group: G.L.P. Quinn was at a turning point when he released "17 Reasons" in 1997 which featured a star cast of bay area all stars. The album sold 65,000 units independently. After the success of the compilation he and his cousin Messy Marv joined together and put out Explosive Mode in 1998. The album sold 20,000 independently and gained a lot of respect throughout the industry. For the next couple years he went on tour and performed with names like Jay-Z, Master P, and Monica.

Quinn's mission became clear- he decided to do whatever it took to bring San Francisco and the bay area to the forefront of the music industry. In 1998 he started Done Deal Entertainment with Charles Kelley. In 2001 Quinn put out "The Mighty Quinn" under Champeli Entertainment. The album featured the song "Give It Up" which brought back the resurgence of radio play in the bay area. Then, "Come See Us" with KNT and "Welcome to the Bay" with Bailey, Willie Hen, and Big Rich. Done Deal Entertainment started putting out mixtapes and collaboration albums to bring their buzz up even more. In 2004, Done Deal collaborated with NBA superstar and longtime friend J.R. Rider to release "I Give U My Word". It sold over 13,000 copies to date, which was very impressive because they had no distribution for the album. Quinn's success has translated not only into record sales, but record breaking, as well - Quinn is actually featured in the Guinness Book of World Records for appearing on the most albums of any rap artist.

Quinn recently released the highly anticipated album: "The Rock-Pressure Makes Diamonds." of the album, he says "The Rock is a defining moment in San Francisco rap history. I feel like the timing's right and my situation's right and I made an album that reflects that." When asked about the title, the rapper responds "That's how I feel - isolated, standing alone out in the Bay Area. All these hard muthafucka's done came up off that rock (Alcatraz) and I breathe the same air." And like diamonds, the album shines.

The Best Of San Quinn

What Goes Around Comes Around: Good Karma

Can't Take The Ghetto Out A Nigga

The Redemption Of Quincy Brooks Vol. 1

The Tonie Show: Addressing The Beef

From A Boy to A Man