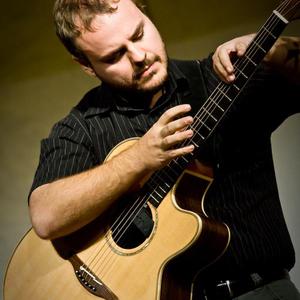 Andy McKee (born April 4, 1979, in Topeka, Kansas) is a talented American fingerstyle guitarist. A live performance he gave of his signature song "Drifting" became a Featured Video on YouTube in late 2006 and since then has achieving over 40 million views, making it one of YouTube's highest-rated music clips. McKee is lauded by many critics and guitarists as the most promising fingerstyle guitarist to arrive on the scene in some time. Born in 1979 in Topeka, Kansas, Andy began playing guitar on his 13th birthday when his father bought him a classical guitar.

McKee is lauded by many critics and guitarists as the most promising fingerstyle guitarist to arrive on the scene in some time. Born in 1979 in Topeka, Kansas, Andy began playing guitar on his 13th birthday when his father bought him a classical guitar. It was not long after that Andy got his first electric guitar and began emulating some of his favorite music of the time; Metallica, Eric Johnson, Joe Satriani, and Dream Theater.

Andy's 16th birthday was a pivotal moment in his life. A guitar playing cousin took him to an acoustic workshop by a guitarist named Preston Reed. Shortly after, Andy discovered the music of three other great acoustic guitarists; Michael Hedges, Don Ross, and Billy McLaughlin, all whom he considers as his primary musical influences today.

Composing was something Andy caught on to a little bit later and started writing when he was 20 years old. Andy released his first CD titled "Nocturne" in 2001 and competed in the prestigious National Fingerstyle Guitar Competition in Winfield, Kansas. He placed 3rd, making him the youngest competitor to ever place in the top 3.

In 2003, Andy began playing internationally beginning with a tour in Taiwan with renowned guitarists Jacques Stotzem, Isato Nakagawa, and Masaaki Kishibe. He also placed 1st in the Miscellaneous Acoustic Instrument contest in his home state of Kansas with the harpguitar. In 2004, Andy Released his 2nd CD titled "Dreamcatcher". With the title track, Andy won a competition to have a chance to perform on stage with bassist Michael Manring. Andy also won 1st place in the Kansas Fingerstyle Guitar Competition and 2nd in the Canadian Fingerstyle Guitar Competition.

In the time since, Andy has performed in various parts of the world including Japan, China, Belgium, England, Canada, and will begin performing even more in the States now. In late 2005 Andy joined Candyrat record label alongside one of his biggest inspirations, Don Ross.

From Andy, "Most of all, I hope my music communicates something to the listener. I don't want to just play music with a lot of skill. I hope listening to my music is an emotional experience!"