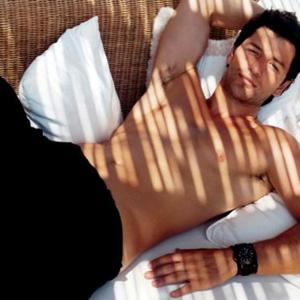 Sakis Rouvas (Greek: &Sigma;?&kappa;&eta;&sigmaf; &Rho;&omicron;&upsilon;&beta;?&sigmaf;; born on 5 January 1972 in Mandoukion, Corfu, Greece) is a Greek musician, television and film artist, businessman, and former pole vaulter who is one of the most successful and influential entertainers of all time in Greece and Cyprus. Beginning a career as a member of the national athletics team, Rouvas commenced a musical career in 1991 and became one of Greece's first pop performers; widely recognized as the genre's main performers to this day...

Very soon, music and singing became a part of his life. His classmates certainly still remember an unforgattable graduation party where Sakis was the undisputed star of the show as he performed the greatest hits of Elvis and the Beatles. Gymnastics was also his other passion where he achieved distinctive national awards. He also excelled in pole vaulting and, as an exceptional talent that he was, he became a member of the Hellenic National team.

Sakis made his first professional appearance in Athens, in 1991. It was there where Polygram "discovered" him, offering him the first recording contract. Only a few months later he made an outstanding "debut" by performing at the "Thessaloniki Song Festival". The song titled "Par' ta" won the first award for music and Sakis got his first experience of the enthusiastic fans who immediately sensed that a new star was to rise.

Ever since then things unfold rapidly for the young performer. His first solo album titled "Sakis Rouvas" was released one day after the festival and youth from all around Greece showed their love for him by making the album a massive No. 1 hit. Stands and posters of Sakis Rouvas were decorating every young girl's room while media in Greece were speaking of a new star. Soon the sighs turned into screams and his new live shows became a regular cover story for all kind of magazines.

For four years in a row he monopolises the Hellenic Music Awards as he receives the best New Singer, the Best Song, the Best Stage Performance as well as many other awards. By now he is the top Greek stage performer, appearing together with some of the most prominent Greek singers such as Tolis Voskopoulos, Anna Vissi and Kaiti Garbie.

On May 19th 1997 Sakis makes a step towards peace and reconciliation by appearing together with the Turkish pop star Burat Kud in a bicommunal concert organised, in the controlled by the United Nations, territories of the island of Cyprus. The concert becomes a news' headline worldwide thus causing a political impact. For the said concert Sakis was awarded with the international "Ipeksi prize" for the understanding and the cooperation. During the same year, the prize was also awarded to the Undersecretary of State, Yiorgos Papandreou and the former Prime Minister Constantinos Mitsotakis. Sakis and Burak also recorded a song duet for the Walt Disney movie, " The Hunchback of Notre Dame".

Since 1996, Sakis is happy to have the largest fan club in Greece, the "Sakis Rouvas Fan Club" or "SRFC", with thousands of members coming from all parts of Greece as well as from many other countries. The fan club publishes its own newsletter, which is then sent to every member by post.

After 5 albums (two gold and a platinum one), Sakis moved to MINOS - EMI record company. His latest album "Kati apo mena" (A little something of me) on December 1998 became a great hit only a few days after its release. In fact, two months later it became gold. The release was followed by an outstanding live performance in one of the biggest record stores (Virgin Megastores) where thousands of his fans caused a traffic jam in one of the busiest Avenues of Athens. His new album could not but enhance his great success. For once more he was awarded as the Best Stage Performer by the Hellenic Music Awards critiques.

Sakis who always wants to make an impressive appearance on stage using all his performing, singing and dancing skills, made an unprecedented sensation in October 1998 when he appeared on stage wearing a skirt that was especially made for him by the world famous Haute Couture designer Valentino. Sakis not only made an outstanding performance singing his new album but also became for once more a cover page story as all the clothes he wore for this amazing show were costumes designed by Valentino in person especially for Sakis.

The new millenium found Sakis in the studio recording for his latest album "21 Akatallilos" (21st X-Rated), that was released in March 2000. Once again, it hit the top of the charts from the first day of its release.

In the summer of 2000 Sakis, being the only true pop star in Greece, is asked by the management team of PEPSI to star in the new advertising spot for their summer campaign. This was a great event for the media since no other Greek artist ever, had an offer such as this one. A British team that was brought in Athens especially for this produced the advertising spot for the campaign. The result is absolutely brilliant as the screenplay was written especially for Sakis to fit his image and impact on his young female fans. Again, Sakis is being nationally heard for his actions and receives excellent critique not only from his regular fans but also on a national level. Pepsi launched collectors' cans with Sakis' photos.

Since 2002 Sakis has been promoting his carrer abroad. He has a five-year contract with the Universal recording company in France and has released an album for the European market with the cooperation of the famous songwriter Desmond Child.

In the spring of 2004 Sakis was asked by the public national TV to represent Greece in the annual Eurovision Song Contest. He performed the song "Shake it" and indeed he shook the whole arena on May 15th, in the finals. He got the third place eventually but won the hearts of millions across Europe.

This Is Our Night