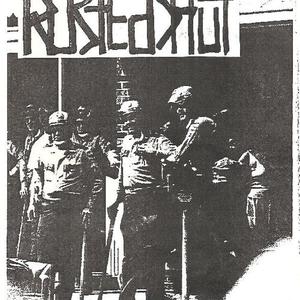 Rusted Shut formed in 1986 and continue to lay their repetitive napalm music on the lucky unwashed of Texas. As performers, their live show is infamously entertaining, arguing, backhands, kicking and all. Leader Don Walsh, a former oil rig worker, writes romantic lines like "I never asked to be born / I wish I would fuckin' die" and "Do you like this life / Do you like to slice?" Though made by lovely harmless people, Rehab is the culmination of many years of genuine hatred, and with this long-delayed sophomore release, the whole Earth may now bathe in their infectious scorn.

The proper Rehab album (the first eight songs, barely released on CDR in 2003) was mixed and mastered beyond the red onto a frying cassette deck for maximum scuzz. A nice handful of hi-fi studio tracks rounds out the dish, making this fiveinch wonder a welcome return to pure rocking beauty, while providing a nourishing cleansing of the bile many of us live with.

?Anybody familiar with the drunken riot that is Rusted Shut might suggest that their appeal is limited. On the contrary, anybody with more than a passing interest in distortion would be amazed at the oversaturated, rumbling filth these Houstonian transients cajole from their amps. Rehab is the sophomore album nearly 10 years in the making, but when Don Walsh sheds blood on the altar during "Jesus Christ Inca," it feels like a long-lost scripture from a bloodthirsty antediluvian civilization. Walsh continually belts out meth-and-moonshine-fueled vocals on the verge of a blood-coughing breakup. "End Is Near (Veranda)" in particular is over-the-top beyond belief. Crank it up to 12 for four minutes so harsh and gripping they make the actual apocalypse seem like a picnic. Tacked on to eight scalding tracks from a 2003 CD-R is a quartet of newer tracks that find Walsh's voice treated with Gibby Haynes-style distortion. These numbers hold a higher treble quotient, with bassist Sibyl Chance and drummer Domokos Benczedi deviating slightly from their crowbar-on-concrete methodology. It's a nice respite from the low end, and a great setup for live closer "Borin Fuckin Town," in which the Shut pay tribute to their beloved hometown by coaxing sickly squeals from their molested instruments as Walsh shouts out to HTX. Is it the humidity, urban decay, syrup, or Roger Clemens that birthed this 18-year-old Houston institution? Hard to say, but in an OC-approved indie-rock landscape of pap, Rusted Shut is a necessary enema of absolute conviction and ridiculous intensity. (four stars)? - Michael Chamy, Austin Chronicle