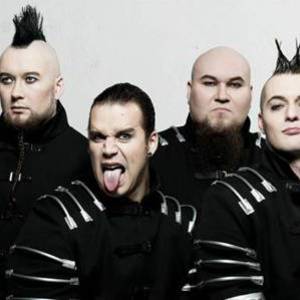 Ruoska (Finnish for "whip" or "scourge") is a Finnish band from a little town called Juva. They have been compared to the German band Rammstein in the era of "Sehnsucht". This comparison is often made with their single, "Darmstadt", from their "Riisu" album, most notably by Rammstein's own singer, Till Lindemann, in a Finnish magazine interview. One of the factors making them greatly stand out from those bands to those who listen to them, however, is singer Patrik Mennander's combination of low, growling speech and conventional singing. The lyrics are exclusively in Finnish.

At the end of 2006 Ruoska formed "Ruoska Puolue" (Ruoska Party) for their fans as a sort of fan database and fan support group and it has a semi-political appearance.


At December 2007, Ruoska released free netsingle "Pirunkieli" from their upcoming album named "Rabies" at MySpace.
They released "Rabies"-album on April 9 2008.