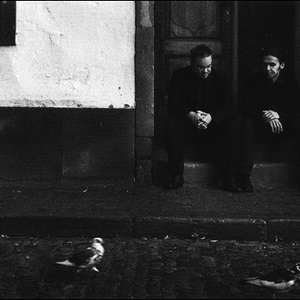 There are multiple artists with this name: 1) Luxembourgish neofolk/martial act. 2) Hip-hop mc and producer from Los Angeles, USA. 3) R&B singer from Benton Harbor, USA. 4) Experimental dub-influenced band from Chicago, USA. 5) Cape Verdian zouk singer. 6) Singer and guitarist from USA. 1) ROME is a Luxembourgish neofolk/martial act founded in late 2005 as the main output for the songs of Jerome Reuter and was joined by co-producer Patrick Damiani as official member in early 2008.


1) ROME is a Luxembourgish neofolk/martial act founded in late 2005 as the main output for the songs of Jerome Reuter and was joined by co-producer Patrick Damiani as official member in early 2008. ROME signed to the Swedish label CMI in 2006 to release an EP titled "Berlin" (June 2006) and the albums "Nera" (November 2006), "Confessions d'un voleur d'ames" (April 2007), "Masse Mensch Material" (March 2008). In 2009 ROME got signed to the german label Trisol and released the EP "To Die Among Strangers" (May 2009) and the album "Flowers From Exile" (June 2009).
In their earlier work ROME mixes influences of Industrial and Neofolk with Experimental and Electronic Pop. The traditions of (French) Chanson and (American) Folk are becoming more and more influential in their current work. In 2009 violin player Nikos Mavridis officially joined the band to further contribute to the creation of their unique sound, which they themselves refer to as Chanson Noir. Nikos left the band in late 2010 to answer the army's call and Patrick found himself more and more tied up in the work for his own professional recording studio in Germany. ROME released the EP "L'assassin" in early 2010, shortly before going into hiatus, followed by the full length "Nos chants perdus". In 2011, Jerome, the project's only real flag-bearer, recorded and released the trilogy "Die Aesthetik Der Herrschaftsfreiheit" (Trisol) and has taken up touring again with his new band mates Patrick Kleinbauer, Eric Emmel and Tom Luciani.
Information can be found on the Rome myspace.

3) Rome was a smooth R&B singer, born Jerome Woods in Benton Harbor, MI, USA. Early on, he sang along with his mother's soul records (Marvin Gaye, Sam Cooke) as well as in the local church choir. He joined an R&B cover band named Fire & Ice while in high school, and traveled around the region performing in local clubs and talent contests as a solo act and with the band. Woods dropped out of Alabama's Oakwood University in 1989 to pursue his dream on the West Coast, and toured with Vesta as a backing vocalist as well as appearing in industry showcases and cable-access programs.
Finally, he connected with producers Gerald Baillergeau and Victor Merrit, who sent his demo to RCA Records. The label signed him immediately, and he began working on his debut album in mid-1996. The self-titled LP appeared in April 1997 and soon ascended to number 30 on the album charts, earning gold certification. Thank You followed two years later.
Myspace

4) Rome was a experimental dub-influenced band from Chicago, USA on Thrill Jockey that consists of Rik Shaw (Bass, Melodica), Elliot Dicks (Drums) and "Le Deuce" (Samples, Tapes). They have released one, self-titled album on Thrill Jockey records in 1996, consisting of seven songs culled from hours of improvisation, an EP with radically different mixes of two tracks not from the album, one of the tracks from the EP "Beware Soul Snatchers" appears in a further remix on the "Macro Dub Infection Volume 2" compilation.

6) Rome (full name Rome Ramirez) is a singer and guitarist who was chosen to become Sublime's new frontman on the basis that a fully-fledged reunion occurs. He has already fronted Sublime for what seems to be a one-off show back in March 2009 in Nevada.
Myspace

The Best Of Rome