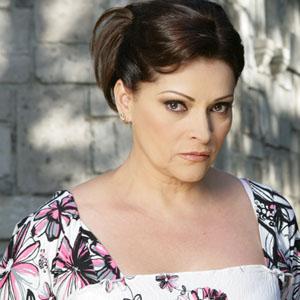 Mar?a del Roc?o Banquells Nu?ez (born June 22, 1958), is a Mexican pop singer and actress, best known for her work on television, the stage and cinema of Mexico and Latin America. Her mezzo voice is one of the most versatile voices from Mexico. She sings operetta, ranchero, rock, and ballads. Born in Monterrey, Mexico in 1958, Roc?o is the daughter of the Mexican actor and director Rafael Banquells and the actress Dina de Marco.

Born in Monterrey, Mexico in 1958, Roc?o is the daughter of the Mexican actor and director Rafael Banquells and the actress Dina de Marco. She is half-sister of the actress Sylvia Pasquel (daughter of her father and the well-known actress Silvia Pinal). Her other brothers are Janette, Jose Manuel, Mary Paz, Ariadne and Rafael.

Rocio begin her career in a special guest in the 1968 Banquells's telenovela Gutierritoz. She moved to the stages in the early 1970s. In 1978 she starred o the musical Sound of Music along the Mexican singer Lupita D'Alessio. Other notable stage performances of Roc?o are in the Mexican versions of Grease and Jesus Christ Superstar. In 1979, Rocio starred in the Mexican telenovelas's international success Los ricos tambien lloran, alongside Ver?nica Castro.

Other memorable Banquells performances in the TV are Bianca Vidal (1983) and La fiera (1984). She realized memorable interpretations specially in evil characters.

In 1985 she began her musical career with the album Roc?o Banquells, that includes the 1980s superhits Este hombre no se toca, Luna M?gica and Abrazame.

Banquells continued her musical career during the late 1980s and early 1990s. In 1997 a legal conflict caused the Banquells retirement for over 10 years.

In 2006, Banquells returns in the Televisa's reality show Cantando por un sue?o, and in 2007 returns with a new album named Nac? para t?, recorded live in the Teatro de la Ciudad in Mexico City. In the same year, she returned to the TV in the telenovela Pasi?n.

For her work in the recording industry, stage and television Banquells' handprints and star have been embedded onto the Paseo de las Luminarias in Mexico City, alongside her half-sister Sylvia Pasquel.