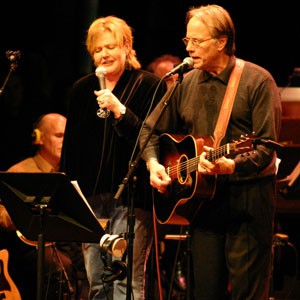 For more than three decades now, Robin & Linda Williams have made it their mission to perform the music that they love, "a robust blend of bluegrass, folk, old-time and acoustic country that combines wryly observant lyrics with a wide-ranging melodicism." Today some might call it "Americana," but these two revered music masters were living and breathing this elixir 20 years before that label was turned into a radio format.

As live performers they are second to none. Their stirring concerts have earned them a huge body of fans over the years. But as gifted songwriters Robin and Linda have earned an even rarer honor, the devotion and deep respect of their musical peers. As The Washington Post put it, "The Williamses are able to sum up a life in a few details with moving completeness." The list of artists who have covered their original songs include some of the greats of country music, names like Emmylou Harris, Tom T. Hall, George Hamilton IV, Tim & Mollie O'Brien, Mary Chapin Carpenter, Kathy Mattea and The Seldom Scene.

"Among contemporary country performers,, Robin and Linda Williams shine like a diamond amid rhinestones ..." __ David W. Johnson, The Boston Globe

Linda is a native of Anniston, Alabama and Robin (the son of a Presbyterian minister) was born in Charlotte, North Carolina. They met and fell for each other in 1971 on a visit to Myrtle Beach, South Carolina while Linda was teaching school and Robin was a full-time musician on a national coffeehouse circuit. It wasn't long before they discovered additional magic when they combined their voices in harmony.

Despite being true children of the South, their career got its initial momentum up north in the Minneapolis folk scene. Robin had made many friends and connections there as a solo artist and in 1975 they recorded their first album in Minneapolis for a local record company. The same year they made their first appearance on a little radio show just getting off the ground called "A Prairie Home Companion" and their rich relationship with that icon of American broadcasting has continued for three decades.