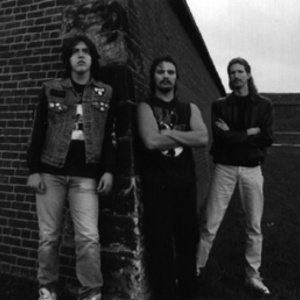 1. REVELATION began creating their DARK, HEAVY sounds back in May of 1986. Comprised of John Brenner - guitar/vocals, Andy Kremer - bass, and Steve Branagan - drums, they released the demo "Face Reality". Shortly afterwards, Andy left and the lineup consisted of John and Steve with John performing the bass duties. Revelation's sound and style became more defined and the demos "Terminal Destiny", and "Images of Darkness" were released. The demos received mass acclaim in the underground network. In February of 1988, Bert Hall Jr. joined as bassist and made the line-up complete. REVELATION proceeded to record their fourth demo, "Illusion of Progress", which added a new dimension to their style and gained them label interest.
REVELATION appeared on the Doom Metal sampler "Dark Passages" which led to a recording deal with Rise Above Records (owned by Lee Dorrian, of Cathedral/Napalm Death fame). "Salvations Answer", their first full-length recording, was recorded in June of 1990 and released on Rise Above in early 1991. "Salvations Answer" received critical acclaim in magazines and the metal circuit alike. Shortly after their first release, instead of sitting idle, the band decided to record its fifth demo, "The Unbearable Vision". The demo sold out and gained them immense fanzine coverage. Later that year, Bert Hall Jr. left the band and was replaced by Josh Hart. Upon playing many shows locally, including a cable television appearance, REVELATION felt it was time to record again.
"Never Comes Silence" was recorded in early 1992 containing 9 songs totalling 70 minutes of music, including the eighteen minute epic title track. Upon receiving different label offers, REVELATION decided to sign with Hellhound Records in the summer of 1992. Their second full-length recording was released in early 1993 and it also gained them critical acclaim.
Unfortunately, shortly after the second release, long-time guitarist/vocalist John Brenner decided to leave the group. Faithful friend and fan of the group, Dennis Cornelius, was recruited as John's replacement. Josh Hart also departed the group, but Dennis and Steve vowed to keep REVELATION alive. The two recorded a promotional demo in February of 1994 entitled "Mourning Son", which continued interest in the band from their fans and record label. Jim Hunter came on board in the Spring of 1994 as permanent bassist, and the three began preparing for their third full-length recording adventure. "...Yet So Far" was recorded in Nov./Dec. 1994 and was released by Hellhound Records in early 1995. The songs highlighted the bands continued progression and received positive reactions from critics and fans alike, including a 4/5 K rating in Kerrang and a position as 3rd best album of the month for March 1995 in Metal Hammer (Germany). The album's release was followed by European tours with Saint Vitus in March and Solitude Aeturnus in May of 1995. The band followed the tours with local shows and began writing new material. After a brief split with Dennis in March of 1996, the band reunited and recorded a new demo in December of 1996 entitled "Frozen Masque". The band would search for a new record label that would not come.
A long hiatus ensued, and the band reunited for the first Stoner Hands of Doom Festival in August of 1999. The band was excited about playing together again and discussed writing material for a new album. The opportunity would not present itself until 2002 when the band was invited to headline the first Doom Shall Rise festival in Germany. The show, which was held in February 2003, also featured many of the great doom bands of Europe and sold out quickly. Revelation also was part of a short tour that followed the festival with Mirror of Deception and Reverend Bizarre.
As the band prepares material for a new album, The Miskatonic Foundation released "Frozen Masque" in October 2003. The CD features the "Frozen Masque" and "Mourning Son" demos as well as 2 live recordings, photos, and lyrics. Revelation looks forward to recording their fourth full-length album and performing together again. The style of REVELATION combines the crushing heaviness of Black Sabbath and Trouble with the experimental nature of Rush and Voivod, mixed with other various personal influences, to create their own unique metal sound.

3. A Progressive/Thrash Metal Band from Turkey. They have EP which is called Gallipoli 1915. They are recording their debut album Between Dreams & Nightmares these days. You can also download their EP for free, http://www.reverbnation.com/revelationturkey

Revelation was formed in 2003 by Baran Yasar, Bur?in Ak and Ertug Azeloglu. At the beginning, this three friend wanted to participate in a serious projects. In a time, it became a project which was submitted to the appreciation of people and they enjoy.

This period of time, Atilla Badem joined the band as a bass guitarist and Umut Saydam as a guitarist. Good and bad comments as they received began to direct the band's music. Until today,the band took participate in many organizations in Turkey and also in a national radio they had a performance.

In addition, Baran and Ertu? have been composing music to computer games, television programmes. Surely this helped to the Revelation, they reached too many people in a local and world-wide. With their EP, called Gallipoli 1915, they were able to stay on #1 for weeks in BESONIC (Germany-based website). Also faced with a similar situations in their demos, the band is currently working on their debut album called "Between Dreams & Nightmares".

4. A reggae group from the UK. Albums include "Revelation" and "Variation on a Theme" (both 1979)

5. Revelation is a very promising Doom Metal band from Belorussia led by two people ?????? ???????/Skourat Alexey (vocals) and ??????? ??????/Ziborow Sergey (guitars, keyboard, etc). By now, they have released one demo called "Forgotten Empire" and three full-length albums at their home studio and managed to achieve outstanding quality of the recording/mastering process.

Their first album "Expulsion from the Paradise" (2001) was released without a contract (basically stolen) on an unknown label and as the result, was made available for download to everyone by the band members at the homepage, which is now semi-dead unfortunately.

The latest two albums "The Forms of Suffering Flesh" (2004) and "???? ??????????" (Inaya Real'nost'/Another Reality) (2006) were officially released on the russian label AMG (Art Music Group) and received many positive reviews and enthusiastic responses.

6. Revelation. A pop/rock band that is based in The Netherlands. The band started off in 2006. The line up of the band is Franchesca Allen - Vocals, Sietse Iedema - Electric Guitar, Bart Hopster - Drums and Sylke Clemens - Bass Guitar. At the moment the band does al lot of covers, but have brought out 2 singles.

8. Revelation. An East London-based mixed-voice choir that competed in the 2008 edition of Last Choir Standing. They finished in 3rd place.

The Forms Of Suffering Flesh

Get In Touch (Vinyl)