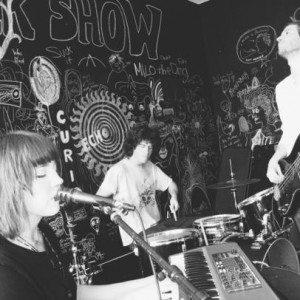 Originally, Religious Knives started in Brooklyn, New York, United States in 2005 as a two-piece side project of husband and wife Mike Bernstein and Maya Miller of the improvisational band Double Leopards. The duo decided to branch out to pursue music in a new incarnation, and after adding Nate Nelson from Mouthus on drums they started to realize the new band's potential. Bernstein and Miller pulled out of Double Leopards and roped long time friend Todd Cavallo in a bass player, after a few auditions.

After experimenting, eventually the band found a safe haven in Brooklyn's No Fun Productions, and the group's first full-length, Resin, was released by the label in April of 2008, followed by The River released on Ecstatic Peace / Universal in October.

Religious Knives combine noise drones with buzzing guitar, organs, drums, bass, and dueling vocal harmonies to make an eerie blend of reverberated psychedelia that references wintry (often chillingly cold) sounds of the '60s. The Velvet Underground, Goblin, and Popol Vuh are a few of the band's influences, meaning that, along with a love for horror music and psychedelic trip-outs, krautrock fuels the fire, making for some lengthy jams of stretched monotony.