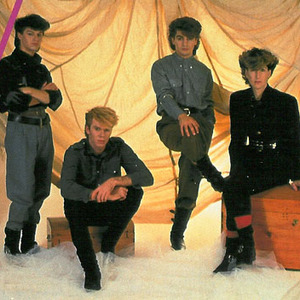 Pseudo Echo were an Australian new wave band. Formed in the early eighties by school friends Brian Canham (vocals, guitars, and keyboards) and Pierre Gigliotti (bass and keyboards), the band completed its lineup with Anthony Agiro (drums) and Tony Lugton (guitars and keyboards). Their first album Autumnal Park was an Ultravox-influenced album that yielded the Australian singles "Listening" (produced by Peter Dawkins) , "Stranger in Me", "Dancing Till Midnight", and "Beat for You". It was a mature album that gave little indication of their youth.

Their first album Autumnal Park was an Ultravox-influenced album that yielded the Australian singles "Listening" (produced by Peter Dawkins) , "Stranger in Me", "Dancing Till Midnight", and "Beat for You". It was a mature album that gave little indication of their youth.

Their climb to success in the summer of 1984 was rapid, and they quickly became the second biggest band in Australia after INXS.

"His Eyes", a track from their first album, received exposure overseas as it was used in the movie Friday the 13th: A New Beginning.

Their second album, Love an Adventure (1986), was also a success with several singles from that album topping the Australian charts including the title track, "Don't Go", "Try", and "Living in a Dream". The album was re-released the following year to include their remake of the Lipps, Inc. song "Funky Town", which brought the group their biggest international success, reaching No. 6 on the Billboard Hot 100 in the USA in 1987, as well as spending six weeks at #1 in Australia.

The overseas release of Love an Adventure featured a somewhat different track listing which included re-mixed versions of 3 singles from Autumnal Park: "Listening", "A Beat for You", and "Destination Unknown". These were remixed to sound more rock-oriented, to better-match the other tracks on the album. Brian Canham even re-recorded the vocals for a slicker sound to compliment these rock remixes. Once again, the overseas version of Love an Adventure was re-released to include the re-make of "Funkytown", replacing "Don't Go" in the original track list.

In 1987, the band re-released "Listening" for the movie North Shore starring Nia Peeples.

Their third album, Race (1989), went further in the direction of pop rock and metal. The album featured the Australian singles "Fooled Again", "Over Tomorrow", "Eye of the Storm", and "Don't You Forget". The album wasn't very successful, as the band's move to a more rock/metal genre had apparently alienated a good portion of their established fanbase. Pseudo Echo disbanded shortly after touring for Race in 1990.

The band reunited in 1999 to produce the EP Funkytown Y2K: RMX, which included 6 new remixes of "Funkytown". A year later, they released the double-CD Teleporter (2000), which featured 4 all-new tracks, 5 re-mixed tracks, and a live performance in Melbourne. The live performance featured all the tracks from Autumnal Park except for "From the Shore", along with a few tracks from Love an Adventure and a performance of the rare B-side "In Their Time".

Since reuniting in 1999, the band has been touring constantly in Australia, and were last seen touring with the "Idols of the 80s" in 2005.

Pseudo Echo has stated they were originally influenced by Simple Minds, Ultravox, Japan and then later Duran Duran and Human League.

Live At The Viper Room