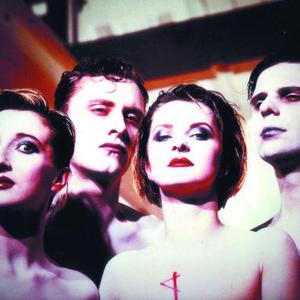 There are at least ten artists sharing the name Propaganda; The name is used by a German synthpop band, a Spanish metal band, a Bulgarian crossover band, a Polish hard rock band, a British DJ duo,a Russian pop band, a Finnish gospel band as well as a Greek anarchist political hip-hop band, a Romanian alternative band, an Italian nsbm band, and an American underground rapper, an German rac band.

German: The first Propaganda was a synthpop musical group formed in D?sseldorf, Germany in early 1982 by Ralf D&ouml;rper (a member of the German industrial band Die Krupps), Andreas THEIN and Suzanne Freytag. The trio recorded some demos for future release. Journalist Paul Morley signed the band, with the inclusion of classically-trained musician and composer Michael Mertens and Claudia Br&uuml;cken, now a five-member band to Trevor Horn's ztt Records label. The group relocated to the United Kingdom and released the single "Dr. Mabuse", which reached the UK Top 30.

Thein left the band before it began recording its debut album "A Secret Wish". ZTT's plan to have Trevor Horn produce Propaganda's debut had to be abandoned because of the huge success Horn was having with Frankie Goes to Hollywood, so Stephen Lipson (Horn's engineer) took his place. The release of the album was preceded by the release of single "Duel", which became a hit for the band. The album received considerable critical acclaim and unexpected commercial success, but the group members had lost faith in ZTT. A remix album, "Wishful Thinking", was compiled by producers Stephen Lipson and Bob Kraushaar and released in 1986 without consulting the group.

Friction between Propaganda and ZTT had arisen when the band realized that their recording contract with ZTT would leave them without any remuneration for their work. A source close to the band confirmed that the group members received their first royalty payment for A Secret Wish from ZTT in 2000. The royalty payment amounted to per band member. ZTT had recouped recording costs of more than in the 15 years since the release.

Claudia Br&uuml;cken left Propaganda to pursue a solo career. She stayed with ZTT, having married the label's publicist Paul Morley. She joined with Thomas Leer to form ACT.

In 1990, Mertens returned with a new Propaganda line-up which included vocalist Betsi Miller, and former Simple Minds rhythm section: Derek Forbes and Brian McGee. The result was a new LP "1234" on which Freytag and D?rper made guest appearances. Despite a radio-friendly debut single "Heaven Give Me Words", co-written by 1980s 'synthpop king' Howard Jones, the new Propaganda were not a huge success.

In 1998, Mertens, Br?cken and Freytag reunited, signed an options deal with eastwest Records, and began working on new Propaganda material. Several tracks were completed, including one produced by Tim Simenon and featuring Martin L. Gore on guitar. A video for one song, "No Return", directed by "Keyser Soze" (likely a pseudonym), was produced in Morocco in December 1998. Two-minute clips of it, along with photos of the shoot, were released via the band's official website in early 2000. However, no album materialized, and in January 2002, Br?cken announced, "The reunion was worth a try, but did not work out." Later that year, an untitled nine-track CD was leaked via file-sharing networks on the Internet. Track titles were "Cloud 9", "Ignorance", "Who's the Fool", "Beast within", "No Return", "To the Future", "Turn to the Sun", "Dream Within A Dream", and "Anonymous".

Br?cken then joined forces with Paul Humphreys of Orchestral Manoeuvres in the Dark and formed Onetwo. In 2004 the EP CD "Item" was released, which included "Cloud 9".

Spanish: Propaganda is also the name of an Spanish metal band, from Cantabria. They have a demo, called "Propaganda", and an album: "Genocidio Cultural".

Bulgarian: ?????????? is the name of a Bulgarian metal/crossover band founded in 1996. After playing in different bands Ilian Shiklov (bass & vocals), Ivan Delibaltov (guitar) and Miro Moravski (drums) gathered to jam. After playing a few months they started composing their own music. Their creative work was influenced by bands like Pantera, Machine Head, Metallica, Testament, etc. In 1997 Ivan came up with the name PROPAGANDA. After some discussions they all decided that the name suits perfectly to their music. Songs started to become more and more aggressive, Ilian hardly stopped screaming in the mic. In 1998 PROPAGANDA released their first single "Again". Four old songs recorded at Exhumator Studio between1997-1998.
There were more new songs and in the beginning of 2000 the band started recording their first album at M&D studios. Until the end of the year there were 9 tracks and a contract with the metal label Wizard. Finally after a long time of mixing and mastering the album was ready. The title - "Face to Face". The promotion was on the 16 of December 2001 with special guests Suffer H.
The following year PROPAGANDA opened for HIM at Arena musica. There were also several gigs through the year. The band members state that the best experience they've had was when they opened the show for SOULFLY in Sofia.
In 2006 Propaganda released their second studio album "Scars".

Polish: Propaganda is the name of a founded in 2006 Polish hard rock band leaded by guitarist Patryk Trzaska. Other musicians are Magda Przychodzka (vocals), Adrian Manowski (drums), Mateusz Turek (bass) and Miko?aj Dobber (guitar). On 30 December 2007 Trzaska announced that Propaganda is about to play a farewell gig and split up.

British: Propaganda formed in 2001 by the merging of two Southampton based DJ/producers Andy Buckley and Matt React. Both had been DJ-ing for seven years and have since played throughout the UK as well as around Europe. Their sets have a definite progression: passionately organised and innovative. Profoundly influenced by the roots of Detroit Techno as much as Drum ?n' Bass they bring a unique and uncompromising sound, and with a residency at London's Therapy sessions they are sure to remain propulsive.

Since venturing into production the duo have built up an arsenal with which to assault the scene. Their musical eclecticism merges powerful bass lines with the distinct energy of techno. This niche sound has found a home with Raiden's Off Key record label - Raiden explains his link with Buckley and React: "Out of anyone in the scene, Propaganda are making the closest thing to what I want to hear." With a formidable hybridisation of techno and drum ?n' bass, the trio have formed an inspirational partnership. The result of the first collaboration 'Poltergeist' was quickly taken on by DJ Trace's DSCI4 label, and was soon followed by two of their own tracks 'Let It Go' and 'Breakdance'.

Propaganda are continually working with Raiden on future projects for his Off Key imprint, as well as bringing some of their own distinctive sounds to the label.

Italian: An Italian NSBM Band formed in Italy by Murmur. It released its first full-length recod "Corri Alle Armi... (Run To Arms)" in 2008 under Azermedoth Records. The Album is limited to 500 copies.

American: Propaganda is also the name of an underground rapper and member of the rap group Tunnel Rats.

Valley Of The Machine Gods (CDS)