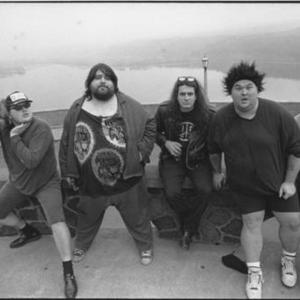 Poison Idea was formed in 1980 in Portland, OR by vocalist Jerry A. (aka Jerry Lang). The initial lineup consisted of Jerry A., Tom ?Pig Champion? Roberts (guitar), Glen Estes (bass), and Dean Johnson (drums). Inspired by Black Flag and other early Southern California hardcore acts, they were further influenced by Discharge and Los Angeles's the Germs. Germs singer Darby Crash was a strong influence on singer Jerry A.?vocally, lyrically, and philosophically?was monumental, and Poison Idea followed the Germs' extremist punk ethic.

In 1984, the band replaced Glen Estes with Chris Tense and released another classic album, the Record Collectors Are Pretentious Assholes 12? (the cover features Pig Champion's substantial vinyl collection). The record found the band incorporating subtle rock elements into their music, which was further honed on their contributions to two 1985 compilations, ?Laughing Boy? on the Drinking is Great EP, and ?Typical? and ?Die on Your Knees? on the legendary Cleanse the Bacteria LP (compiled by Pushead for his own Pusmort label), while still keeping the thrashy hardcore foundation of their debut.

With the release of 1986's Kings of Punk LP, Poison Idea had fully moved beyond the breakneck hardcore of their early records to a potent, driving and ultimately more intricate and sophisticated hardcore/hard rock fusion that incorporated the foot-tapping accessibility and masculine swagger of hard rock without sacrificing the power, speed, and viciousness of the hardcore of the day.

Following the release of Kings of Punk, the band went through several rapid lineup changes (mostly in the rhythm section), added a second guitarist in Vegetable Olsen, and released War All the Time (named for the Charles Bukowski novel) in 1987. With a second guitarist their rock and metal influences became even more pronounced than on kings of punk, with noticably longer song lengths, a greater variety tempos, more detailed guitar solos, and even the inclusion of a Hawkwind/Motorhead cover.

At this point Poison Idea had been involved with a number of record labels and distributors, and particularly with their last 2 full-lengths, had found themselves dissatisfied with the availability of their records to consumers, and the royalty payments they recieved for the sale of these records. Thus, American Leather (named after a Germs song), was founded by the band members, and a series of EPs and Singles were issued through 1988 and 1989, including the Filth Kick EP, the Getting The Fear b/w 4AM 12" single, and the Discontent b/w Jailhouse Stomp single. Each continued to refine the rock/punk/metal hybrid first established on Kings Of Punk. In addition a pre-Pick Your King demo was issued on vinyl as Darby Crash Rides Again, proving the band still had reverence for their earliest days.

Around this time, after numerous lineup changes, PI had convened one of their more stable lineups in Jerry A., Pig Champion, Charley "Myrtle Tickner" Nims (bass) and Steve "Thee Slayer Hippie" Hanford (drums), with second guitar duties oscillating between Mondo and Aldine Strichnine. By this time, their legendary drinking habits and hard living were beginning to catch up with them: the band weighed in at over 1,000 lbs. collectively, and Pig Champion in particular was spectacularly fat, often having to play sitting down.

In 1990, the band released Feel the Darkness. Considered by many an indisputable masterpiece, and frequently cited as the best fusion of hard rock and hardcore punk ever made, it stands as the best known, and most popular release in the Poison Idea cannon. The musical performances are both technically proficient and fierce the lyrics dark and expressive. Most Hardcore and Punk enthusiests agree that it is required listening for anyone interested in either genre.

Following Feel The Darkness Poision Idea continued to release albums and singles that for the most part followed its blue print in sound and style, and while none was ever the same kind of artistic breakthough, they're all generally considered to be of high quality. Through the 90's and into the 21st century, frequent member reshuffling, attempts at other musical projects, drug problems, and financial issues kept the band from keeping a consistent work schedule, often remaining silent for a couple of years, before returing to issue a new release or embark on a tour.

On January 30, 2006 guitarist Pig Champion died at his home in Portland, of kidney failure. PI had recorded a new record and it was ready for release when he died. Pig wanted the record to be called Latest Will and Testament, a name that the rest of the band liked. After Tom's death Jerry commented that Pig probably knew something that the rest of them didn't. The album was released in May 2006 on Farewell Records.

Despite the death of their long time guitarist, and the man many considered the band's heart and soul, Poison Idea continues to play shows and plans to issue more material. Though it won't be the first time they've issued records and toured without the involvement of Pig, many have expressed feelings that it is in poor taste. The band continues to regularly tour both Europe and the United States.

Latest Will And Testament

The Best Of Poison Idea

War All The Time