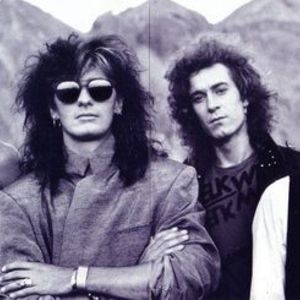 Platinum Blonde is a New Wave group that was first active from the mid 1980s to the early 1990s. The band originally consisted of Mark Holmes from Mansfield, England on vocals and bass, Sergio Galli on guitar and Chris Steffler on drums. Scottish musician Kenny MacLean later joined the group as the bassist. The name of the band was inspired by the 1931 Jean Harlow movie Platinum Blonde. They were known also for their stylish glam rock-like appearance.

Platinum Blonde was inducted into the Canadian Music and Broadcast Industry Hall of Fame on March 12, 2010.

Platinum Blonde originated in 1983 as a tribute band performing the music of The Police in Canada's university and club circuit. In 1983, they signed to CBS Records Canada and released a self-titled six-song EP, which made it to No. 39 on the Canadian album charts. It was quickly expanded into a full length album titled Standing in the Dark, which featured identical artwork to the EP.

The band's popularity on the airwaves in Canada led to a triple platinum (300,000) album, featuring four hits including two Juno Award nominations: "Standing in the Dark" and "It Doesn't Really Matter". Their music videos were placed into high rotation on the newly created MuchMusic, Canada's national music video network.

In 1985, the band released a second album called Alien Shores, featuring the addition of a fourth member, Kenny MacLean. "Alien Shores" went quintuple platinum (500,000), the group's high-water mark of success. Hits from the second album included "Situation Critical", "Crying Over You", "Somebody Somewhere", and "Hungry Eyes".

In 1988 the band's next album, Contact, was a hit in Canada, going double platinum, but was significantly less successful than their previous record. The title track "Contact" was a modest hit, but the album was an overall commercial disappointment, and they were dropped by CBS. Platinum Blonde changed their name to The Blondes and recorded and released one further album to minimal attention before disbanding.

The entire group appeared as alien bikers in the 1988 episode Eye for an Eye of the television series War of the Worlds.

Rumors of a reunion of the original band, and possibly some new material, continued to swirl, as the band played a few charity concerts in the mid-2000s. A DVD video compilation entitled Platinum Blonde: The Complete DVD Collection is in production. According to the band's official website, the compilation consists of nine music videos as well as several bonus features.

Bassist Kenny MacLean was found dead on November 24, 2008 in his recording studio on Yonge Street in Toronto. He had just released his third solo CD entitled Completely at Toronto's Mod Club on Friday November 21, passing away that night after the show of heart failure.

On March 10, 2010, Platinum Blonde played their first reunion show at The Mod Club Theatre in Toronto, Ontario. The original line up of Mark Holmes, Sergio Galli & Chris Steffler were inducted into the Radio and Television Broadcasters Association Hall of Fame. The next day, the band announced on MuchMusic that a reunion is in the works with a new recording and show dates.

On December 6, 2010, an EP containing a cover of the song "Not in Love" was released by the Canadian electronic band Crystal Castles featuring the vocals of UK singer Robert Smith (The Cure) on the Fiction Records label.

In June 2012, Platinum Blonde released a new single "Beautiful" on iTunes and announced a full new album would also be released. The band is currently touring in 2012 to promote their latest material.

Standing In The Dark (Vinyl)