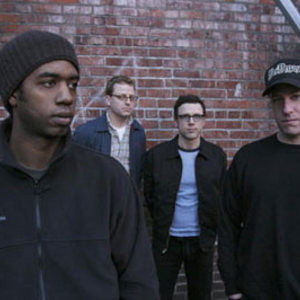 In terms of experience and rock skills, Pinehurst Kids aren't exactly kids anymore. In the mid 90s, Idaho troubadour Joe Davis escaped his childhood haunts of Pinehurst and Boise, Idaho and moved to Portland, Oregon where he began crafting high-energy pop songs with friend and drummer Robler Kind. Joe and Robler played a few shows for beer money as a two piece and were seen by Portland stalwart Caleb Gates, who was for some reason smitten with the idea of playing bass in the band.

Joe and Robler played a few shows for beer money as a two piece and were seen by Portland stalwart Caleb Gates, who was for some reason smitten with the idea of playing bass in the band. With the lineup solidified, it wasn't long before the newly formed trio was ready to lay some tracks at new friend Larry Crane's Jackpot studio. Initially, the band's intent was to make a demo to give to friends and clubs, but focus group response created a substantial buzz around town. So the boys cranked out a few more songs, and with a bit of borrowed cash their self-released debut LP Minnesota Hotel hit the streets.

Minnesota Hotel established Pinehurst Kids as a recognizable sound on the burgeoning Portland, Oregon music scene. The bands sophomore effort, Viewmaster garnered the band more widespread recognition. With the help of Chicago indie Four Alarm Records, the LP charted in the top 10 of the CMJ and recieved glowing reviews from the likes of Alternative Press and Entertainment Weekly as well as accolades from industry big wigs and buddyhead bad boys alike.

Pinehurst Kids' third LP, Bleed It Dry is the band's best and most adventurous record to date. The record showcases the Kids' maturing songwriting prowess and features a bit more production and polish thanks to the mixing skills of John Goodmanson, whose credits include Soundgarden, Blonde Redhead and the Wu Tang Clan. In traditional fashion the tracking was done at Jackpot with Larry who is now known worldwide as the publisher of Tapeop magazine.

The Kids have toured the US extensively and played shows and toured with the likes of Guided By Voices, Built To Spill, Death Cab for Cutie, Alkaline Trio and Superchunk. Their music can be heard on Fox and NBC TV programs including Buffy the Vampire Slayer. As the band approaches it's second decade of rock, they continue to kick out the jams that their friends and fans have come to love. Look for the grand slam effort sometime in 2007.

In 1985, after nearly one hundred years of mining in the Idaho panhandle, "the silver valley" produced it's billionth ounce of silver, making it the richest silver mining district in the world. But over that prosperous century, as the riches were pulled from the ground, the rejected impurities were washed into the surrounding areas, including the tiny town of Pinehurst. The black slag from the mine was even used to fill the traps at the local golf course. Those who lived there knew the story of the ninety-one men who died in a 1972 fire in the sunshine mine shaft. The stores in Pinehurst didn't have enough dress shoes to bury the men right, so the company had to send someone to spokane to buy the rest of the shoes. Today, the sunshine mine has finally been abandoned, and the US government can only search for the kids who lived in the silver valley when the lead flowed directly into the drinking water..

they're still looking for all the pinehurst kids..