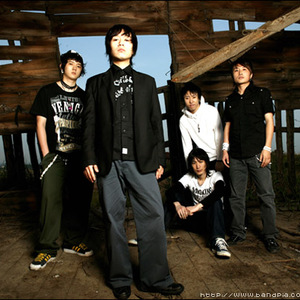 There are two artists called Pia. 1) PIA (or ??) is a Korean rock band. www.bandpia.net 2) Pia (aka Gaurangi) is a new age pop artist. www.piasings.com 3) Pia is a pop rock female vocalist from Indonesia. Also known as the vocalist of Utopia 1. PIA or ?? Pia, which has s meaning of 'Universe and I' or 'You and I' was first set up in Busan, a beautiful southern harbor city of South Korea, in 1998 with five guys named Yohan, Hullang, Kibum, SimZ, Hyeseung.

2) Pia (aka Gaurangi) is a new age pop artist.
www.piasings.com

3) Pia is a pop rock female vocalist from Indonesia.
Also known as the vocalist of Utopia

Pia, which has s meaning of 'Universe and I' or 'You and I' was first set up in Busan, a beautiful southern harbor city of South Korea, in 1998 with five guys named Yohan, Hullang, Kibum, SimZ, Hyeseung.

After pouring out cynical and furious sound in local club concerts and several rock festivals, Pia moved its base camp to Seoul and released its first debut album named [pia@Arrogant Empire] (March 2001).

Right after its debut, this huge empire built on powerful sound coming from the side of frustrated and isolated people caused the huge wave among fans and critics. This album helped Pia create its own musical identity through hardcore sound based on heavy metal.

At the end of the year 2002, Pia joined 'Goesoo Indigene Label' and after 2 and a half years, released its 2nd album named [3rd Phase], which is composed, written, recorded and produced by itself.

This album that carries extreme but emotional sound focuses on internal recognition of individuals with denying formalized edge and trying new rock scene, as the title of the album suggests.

After having its own concerts in September 2003, Pia joined the Linkin Park Korea tour and Limp Bizkit Korea tour in October and December respectably and heated up the opening stage. While experiencing big performance on big stage with international rock monsters, Pia has developed its own attraction as a true live band.

In May 2004, Pia joined 'Seotaiji Live in Vladivostok' in Russia and spread Korea rock music to Russian rock fans.

Pia equipped with diverse live experiences and firm musical potential as shown above was re-invited by Linkin Park to its tour in Hong-Kong and Singapore on June 2004 and answered the request with powerful and energetic performance.

Behind the stage, Linkin Park invited Pia to its after-tour party and suggested to join its US tour together. Also, many People from music industry in Asia requested promotion tour in their countries. Now, Pia is moving forward to the global stage as a global band.

They have released three albums so far.

Originally from London, UK, now located in the USA. Music is quite similar in style to Enya, though with strong eastern mysticism elements and Krishna devotion themes.

According to http://starfields.org/pia-pop.htm she has worked with Dream Academy, Hazel O'Connor, Boy George, MC Kinky and The Young Offenders

Bio from Site: Pia, aka "Gaurangi" has been singing for New Age labels since 1986. Originally from London, England, she has recently relocated to the North Carolina in the United States.

Pia began contemporary western voice training in 1988, and subsequently studied with the prominent Indian classical vocalist, Haridas Ganguli. From 1993 to 1997 Pia toured Europe, America and India with the Jagannatha Band. Performing live to large audiences, she was readily appreciated for her ability to touch each and every person in the crowd with her incredible voice and delivery of traditional Indian devotional songs.

"PIA HAS AN AMAZING, HYPNOTIC, NEARLY ANGELIC VOICE. I SAW HER IN CONCERT IN ENGLAND 3 TIMES, AND I WEPT WITH THE SHEER PURITY & BEAUTY IN HER VOICE. LIVE, SHE TOUCHES THE HEART AND THE SOUL SO DEEPLY, WORDS CANNOT EXPRESS. SHE IS PHENOMNINAL!" - reviewer on amazon.com

In 1998 she released her debut solo album Benediction Moon, recording under the name Pia, with New World Music. Benediction Moon has sold over 40,000 copies and was voted the best album of the year by New World customers .

Her second album, Magical Eclipse, was released in the summer of 1999 and has received frequent airplay from regional radio stations.

Her third album, Pacifica, broke all sales records in the first month of its release.

Pia now lives surrounded by beautiful, old trees in North Carolina, with her husband and their children.Artist homepage is at http://www.piasings.com/