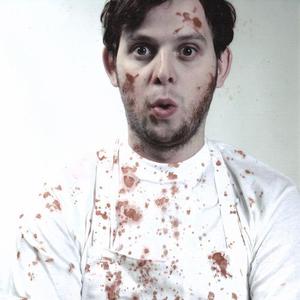 The boy with the dot in his name and the dubby background, started to play records in the early 90s far in the darkest reaches of the ruff'n'tuff Harz mountains, in former East Germany. This little country bumpkin practiced dilingently every night by candlelight at his aunt's farm. 1994. Phon.o cites the hay in the barn, the dirt in the fields and the sheep form calling him from beyond the hills as strong early influences of his deep and dirty style. In these times he got his first turntables and used every free hour to practise in his hidden secret cottage.

1997. Seeking new and bright horizons, our boy moves to beautiful Berlin and is given the keys to his first apartment: a dingy shoebox which even the Russians had left unoccupied during their stint in Berlin.
During the wet autum of 1998 he started to create his own "music" and emerged in the spring of 2000 with his first release, on Cytrax (Kit Clayton and Dj Jasper's itchy, noisy, dubby Californian techno label). The gringos take a liking to their newly-found bro and like the productive little worker that he is, Phon.o cranks out with another ep and a full lenght CD on Cytrax. The big city often leads to encounters with all kinds of shady characters...
Phon.o then found himself misled, used and abused by the notorious big rock'n roll swindler, T.raumschmiere, who connives him into joining his gang Shitkatapult. The whirlwind of confusion reigning in both Phon.o's heart as well as the world around us all seems to have taken its toll on him, these days you'll find him ragged and disillusioned and his music increasingly processed and schizophrenic, injected with shards of vocal samples and obscure sounds taken from hip hop dub, dancehall and techno.
For his live acts, he manages to harness whatever stately ideals he can recall and delivers a staunchly digital and itchy, yet deeply moving and progressive set. Phon.o deals fire and burns down the town around the world ? Europe, Asia, America ? back and forth.
Fire does take its toll on those who wield it and Phon.o eventually realized the need for an image change. He enrolled in the Kunsthochschule Berlin (KHB) in the fall of 2000 and
began studying Communication design. He did cooperations in video and graphics with the
swiss artist Noica Llanos and soundinstallations with the icelandic girl Sara Riel.
Phon.o also designed many record covers, mostly for Shitkatapult, and is a member of the designer group Kiosk Royal
Despite these laudible attempts at being a productive member of society, only a few were fooled. His relapse became evident in 2005 as he appeared under a totally brand new western guise, The Bareback Show, a collaborative project with Exsample: 2 djs, 4 decks, locked groove records only. Phon.o produced a 100-locked grooves EP for "Compact" the locked groove series which is released on the sweet label Normoton.
He releases his new, dirty full length masterpiece - which goes from eurocrunk over techno to booty hiphop and dancehall-grime - "Burn Down The Town" on Shitkatapult and Tigerbeat6 in the end of the warm rainy august 2005 - two weeks after the booty maxi "Trick or Treat" which includes two superb and bouncy remixes by his buddies Funkst?rung and Kit Clayton.
Chris De Luca and Phon.o joined forces in spring 2006. Since then, they've been rocking clubs and festivals all over Europe with their ass-kicking sets as ?Chris de Luca vs. Phon.o?. This unconventional combination of intergalactic hip hop, ghetto beats, sexy booty IDM and dirty techno goes beyond typical contemporary genre boundaries. Berlin, there is new shit in town and it doesn't stink!
Currently, the two are locked inside a studio where they are working like crazy fuckers on new
tracks for their upcoming album to be released in 2007! The Shit goes on?the downward spiral continues...