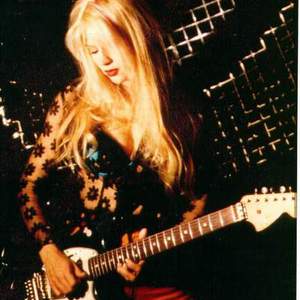 Phoebe Legere is a New York City-based composer, interdisciplinary performer, and visual artist. An influential member of New York City's downtown performance scene in the 90's, during the past decade, Legere has increasingly focused her energy on interdisciplinary New Media, , ranging from virtual musical theater to experimental forms. In 2000, she was nominated for the Pulitzer Prize in Music for her collaboration with Morgan Powell on the ?The Waterclown.?

A dynamic performer on piano, accordion and synthesizer, with a four and half octave vocal range and free-for-all approach to mixing jazz, cabaret, and rock, Legere initially earned renown as a songwriter with hundreds of songs in all genres, and was signed to Epic/Sony Records. Demonstrating Legere's mastery of diverse contemporary musical forms, in 1993 she had eight weeks of sold out shows at The Ballroom in New York, where she performed original songs and blues, French Chansons and Native American chants; and then, opened up for David Bowie on a national tour. She has performed at the Cinegrill in L.A., Michael's Pub, Davenport's in Chicago, the Chicago Cultural Center, Carnegie Hall, the China Club, Aspen Opera House, Freddy's Supper Club, the Supper Club in New York City, The Hong Kong Jazz Club, Philadelphia Art Museum, the Brooklyn Academy of Music, the Brooklyn Opera House, Symphony Space and at the Nairobi Casino in Africa.
During the past decade, Legere has dedicated her creative energy to adventurous, genre bending music composition. In 2001 she received a NYSCA grant to write ?The Queen of New England?, an experimental multimedia opera about the Massachusetts Native American Holocaust. Her musical, ?Hello Mrs. President?, about the first African American woman president of the United States, was presented at Theater of the New City in 2004.
Since 2000, Legere has been a member of the Tone Road Ramblers, a collective composing and music ensemble. This has led to collaborations with Morgan Powell, including ?Common Root of All Organisms? (2002), an ecological opera that tells the story of life starting with the very first one-celled organisms, and ?The Waterclown?, about the formative movements of fluids, which was performed with the Cleveland Chamber Symphony and nominated for a Pulitzer Prize in Music in 2000. She has also collaborated with Eric Mandat on ?Dark Energy? (2004), an astrophysics oratorio.
Recently, Legere has been Artist in Residence at the School of Visual Arts Computer Art MFA department (2003), and at the University of Victoria Graduate School of Engineering and Music (2004). She presented her Sneakers of Samothrace, a wearable computer for music and art improvisation, in a lecture/performance at IRCAM's Resonances Aux Festival in Paris in 2004 and at STEIM electronic music foundation in Amsterdam, Holland in 2006. She has built a second pair of her RAP SHOES for Dan Dubno at CDS News. He demonstrated the shoes at ADIDAS SALOMON on May 20, 2006.
Legere has released seven CD's of original music, and has appeared on National Public Radio, CBS Sunday Morning, PBS1s City Arts, and Charlie Rose. Legere is head writer and host for Roulette TV, a NYC show about experimental art and music. She records for Einstein Records, a label known for experimental and adventurous music. Legere has also been a Native American special educator in the New York City public schools for ten years.
This week Legere's Pulitzer nominated ?Waterclown? her New Classical collaboration with composer Morgan Powell, will be released on TNC Records, Visit TNC.net for more information .
Legere's next CD due in June is an album of her own compositions, produced by Tony Bennett's son Dae at the Bennett Studios. See her play live at RIVERFEST
Saturday July 8, 2006

Children Of The Dawn

4 Nurses of the Apocalypse