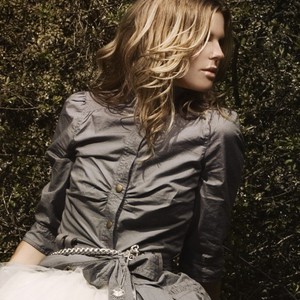 Anna Lovisa Johnsson (born October 4th, 1977 in Gothenburg, Sweden), previously known as Ana, is a singer-songwriter, best known for her song "We Are". Her longplay disc Cuz I Can appeared in April 2004 in Sweden. However, her worldwide debut The Way I Am was released some months later. Little Angel was released in 2006. She became fed up with school and went to the US as an exchange student. She took up skiing as a hobby and is now a semi-professional snowboard artist. She competed and travelled around the US, and at one point she came in 5th and 6th place in a championship in 1996.

She became fed up with school and went to the US as an exchange student. She took up skiing as a hobby and is now a semi-professional snowboard artist. She competed and travelled around the US, and at one point she came in 5th and 6th place in a championship in 1996. Eventually she went back to Sweden in 2001, finished high school and started working at various jobs.

Her singing talents started when she was a teenager and became a singer of coverband @groove and moved to Karlstad.

But her big break started when she heard about the first season of Popstars in Sweden and decided to give it a go. She succeeded in the final and Ana, Jenny Karolina, Kristina Bergfoth, Malin Catharina Olsson and Susanna Emily Anna Patoleta formed the band Excellence. They were a huge success, sold many albums and completed a sold out tour.

However, [artist[Excellence wasn't Ana's style of music and left the band. She continued her music career as a solo artist. In the autumn of 2003, she released "The Way I Am" on the radio and it developed into a radio hit in Sweden and Germany and it gave her a nomination for the 2004 NRJ Awards in Stockholm. She released her debut album Cuz I Can in 2004 soon after. This album was only released in Sweden.

She was approached by the head of Colombia Tristar during a cruise and was invited to contribute a song to the soundtrack of Spider-Man 2. The song was called "We Are" and it became the first single to come off the soundtrack and was released worldwide. It became a big hit and she released the album The Way I Am. The album was followed by the singles Don't Cry For Pain and Coz I Can

Ana recorded a new album in the mean time which was released in 2006. The first single, " Days Of Summer", was released in July 2006. The album, Little Angel (October 2006), was preceded by the second single called "Exception", which is the theme song to the Swedish thriller movie Exit. Johnsson also recorded a song with Finnish rockband Bleak for the soundtrack for the Finnish-Chinese film Jadesoturi (Jade Warrior) called "Fate". It became one of the most played songs on the radio in Finland and got the NRJ award for Best Nordic Song in 2007. "Catch Me If You Can", the album's third single, also was the official theme for the 2007 Alpine World Ski Championships. In February 2007 Johnsson released the album in Japan resulting into sales over 20,000.

The Way I Am