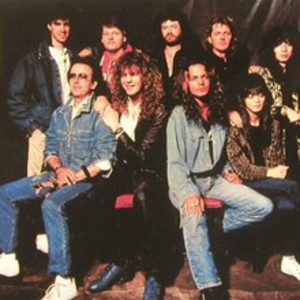 Phenomena is a rock concept around a supergroup formed by record producer Tom Galley, Metalhammer magazine founder Wilfried Rimensberger[1] and Tom's brother, Whitesnake guitarist Mel Galley. Contributors were leading rock musicians such as Glenn Hughes, Brian May, Tony Martin and John Wetton amongst others. In a cover story, run by Kerrang! magazine in 1985, Phenomena's production of rock songs based on a story line running through a whole album, attached to artworks and other multi-media aspects was credited for the "return of the concept album"[2] in the 1980s.

Phenomena released three albums in the 1980s and early 1990s, and had a number one hit single in South America with "Did It All For Love", while the album charted across Europe, in Japan and Brazil. An accompanying music video[3] was shot and produced by Rimensberger in conjunction with Spidercom Films at London's Abbey Road Studios, and represented a video trailer for the Phenomena - Dream Runner movie project.

More albums followed without the involvement of Rimensberger and released under the branding of 'Tom Galley, the creator of Phenomena'. The latest, Blind Faith, was released in September 2010 and a final production is scheduled for release later this year. Whilst all were well received, they were not comparable to the original Phenomena as they lack the typical concept story running through the whole album, international, mixed genre musicians' matrix and multi-media links. In interviews Tom makes clear, that these albums released under a solo contract with the Escape label, of which a final is due later this year, should not be compared with the original Phenomena. He has recently joined forces again with Rimensberger and the 2 are working on the first real Phenomena concept album for 25 years.
[edit] Discography