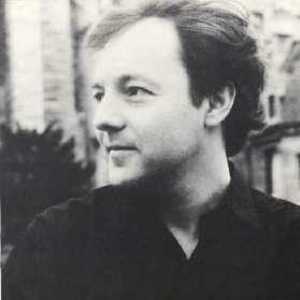 Cult English recording artist Paul Roland, described as "the male Kate Bush" by one-time label mate Robyn Hitchcock, has released 10 albums for collectable labels such as Bam Caruso, New Rose and Imaginary in a low-key career that has seen him acclaimed on the continent but criminally ignored in his native England. In England he is better known as a writer of mass market books on mysticism and the occult for major publishers. However, his reputation as a uniquely imaginative and consistently fascinating figure on the psych-pop circuit has substantially increased with each album.

In England he is better known as a writer of mass market books on mysticism and the occult for major publishers. However, his reputation as a uniquely imaginative and consistently fascinating figure on the psych-pop circuit has substantially increased with each album.
Other cult figures such as Robyn Hitchcock, Nick Saloman (Bevis Frond), Nick Nicely, and Andy Ellison (John's Children) have made guest appearances on his albums, several of which are now listed as highly collectable.

Since 1979 Paul has been spinning his bizarre tales against an evocative backdrop of rock, psychpop, folk and, occasionally, baroque strings.
His most memorable character creations include a crotchety Regency magistrate, various 19th century murderers, a retired executioner, an opium addict, and an entire court of medieval grotesques.
But not all his dreams are dark.
Among his more whimsical creations are the eccentric characters on the largely acoustic album Happy Families and its prequel A Cabinet Of Curiosities.

His first album The Werewolf Of London (1980) which boasted a penchant for historical and supernatural themes was picked up by Armageddon Records, who at the time also had the Soft Boys on their roster.
And it was there that Paul met Robyn Hitchcock who later appeared on tracks for Paul's second album.
After an abortive flirtation with the music business, when he was managed by David Enthoven and June Bolan (widow of Marc Bolan), he returned to Armageddon in 1985 for the mini-album Burnt Orchids.
Its title track was the first to feature Paul backed by a small string and woodwind ensemble, a trademark of all his albums to date.

The success of the album led to Paul's first tours in Europe and label deals in France, Germany, Greece, Italy, the USA and Japan.
A series of diverse albums followed, including the psych cult classic Danse Macabre (1987), the acoustic based mini LPs A Cabinet Of Curiosities (1987) and Happy Families (1988), the rockier Duel (1989) - with its medieval-tinged three-song suite The King Must Die-, the folk rock of Masque(1990), the more commercial Roaring Boys (1991), Strychnine (1992), a mini-album of cover versions and Sarabande (1994). Gargoyles (1996) is a further glimpse into a unique and imaginative mind.
Paul Roland's final offering is Pavane (2004).

The Werewolf Of London