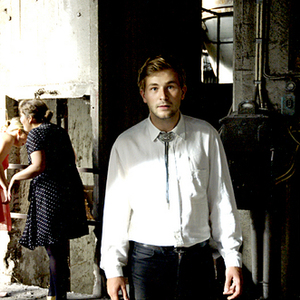 There is more than one artist named Pascal. 1. Pascal is a trio joined together in their love for noisy pop with marvelous melodies all served with a punky twist. It's the first band on Novoton singing in their native Swedish language but when i hear them i don't even think about that. To quote Ian from the excellent Popsheep blog, talking about one of their songs, "I don't understand Swedish, but this song makes me wish that I did.".

1. Pascal is a trio joined together in their love for noisy pop with marvelous melodies all served with a punky twist. It's the first band on Novoton singing in their native Swedish language but when i hear them i don't even think about that. To quote Ian from the excellent Popsheep blog, talking about one of their songs, "I don't understand Swedish, but this song makes me wish that I did.".

How do they sound you ask? If you put The Cramps, Jesus and Mary Chain, Joy Division, Spacemen 3 in a blender and season it a bit with Ebba Gr?n (classic Swedish pop punk band) you will get quite close. But from all their influences they have made a totally own sound/style. They really love playing live which have already given them lots of fans.

2. UK-based drum & bass producer DJ Pascal, Like countless other producers in the genre, Pascal's involvement in drum and bass came through a love of hip-hop. From breaking to electro and honing his DJ technique through following Cash Money and Jazzy Jeff, he went on to lay down his own material onto a four track through cutting records on a pair of turntables.

Although he had been dismissive of acid house, a close friend introduced him to the rave scene in the early nineties - drawn in by the hip-hop samples and influences, which had crept into the music over time. From DJing he became involved in production; following the white label ?Fubar EP? with a couple of singles as Bad Influence before eventually hooking up with Sponge to form Face Records in 1992.

His first solo outing acted as testament to his skills as a producer, ?Johnny Jungle? going on to be remixed countless times and a record heavily influential to the ?dark' period which came to dominate the music of the time with its unforgiving sounds, technical percussives and horror film aesthetic. A series of singles led to ?The Face of the Future? album featuring artists as diverse as Goldie and Alex Reece with tracks for Suburban Base raising his profile still further with ?Flammable?, ?Killa Sound? and ?Move On? still sought after today.

Two years later saw an amicable split, Sponge going on to work with Marvellous Cain at IQ and Pascal establishing his own Frontline imprint. The label was a runaway success, releasing its 50th record in the summer of 2000 and with a back catalog which boasts countless hits - ?P-Funk Era?, ?6 Million Ways? and ?It's Like That? amongst them.

The ?Still Smokin LP,? a collaborative effort with Hype's Ganja imprint encouraged a step to the next level, the pair hooking up with Zinc to set up True Playaz. The label has gone on to be one of the most diverse in drum & bass music; with consistently high sales achieved through the trio's own productions and Hype's ear for A&R. Their 1996 deal with RCA assisted in their worldwide presence as Pascal explains, ?We signed to let our music grow and reach other countries as we felt we could take it to another level with them that perhaps we couldn't achieve as an independent.?

After a sojourn onto major label, RCA, with the Ganja Kru back in 1996, Pascal became a household name in drum and bass circles across the globe, touring internationally and taking his unique style of drum and bass outside of its UK homeland. As the years counted down to the next millennium, ?A New P-Funk Era' became an instant smash. Pascal started the new century with ?The Versions EP' and, in late 2002, ?The Watershed EP' stamped Pascal's distinctive ?mellow grooves with a backbone' sound on the record buying d&b headz.

Fast-forward to 2003, and Pascal shows no sign of letting up. With Frontline releases for hot young things The Insiders and Swedish junglists Blues and Bronco due for imminent issue, forthcoming Pascal releases and mixes coming on Ganja, Frontline and True Playaz, and a True Playaz In The Mix album due for release in the near future, there are no signs of the Funksta letting it slide for some time yet.

6. Solo piano arrangements classified under the name "Pascal" as performed by a student in Connecticut

7. An experimental glitch electronic artist from Greece. An ep "bypass" was recently released on elegirl label.

i think we are alone now-aatw