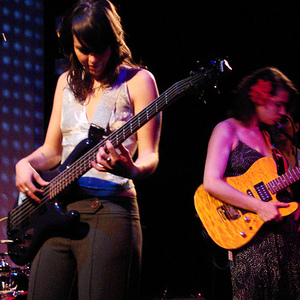 Straight from the boogie-down Bronx, Nacional Records is proud to introduce its first U.S.-based signing, Pacha Massive. Pacha Massive (from ?Pachamama' meaning ?Mother Earth?), is the creative collaboration between Dominican-born Nova (keys / guitar/ writer/ producer) and Colombian-born Maya (writer/bass). The group was recently selected by MTV Tr3s to be its very first ?Discover & Download' artist; the promotion will run the entire month of February, and will include a major presence for Pacha Massive on the television network as well as online and on mobile.

Pacha Massive's music is a funky fusion of traditional Latin rhythms like Colombian cumbia, Dominican palo, reggae, dancehall, dub and electronica sure to get the pachanga fired up.

The duo met in New York while working on a project with Ivan Benavides (Sidestepper, Bloque, Carlos Vives) where a creative collaboration between the two led to the formation of Pacha Massive in 2005. Pacha Massive landed an impressive first gig opening for Colombian rockers Aterciopelados at Madison Square Garden and has since gone on to share the stage with artists like Ozomatli, Sidestepper, and Yerba Buena. After winning the Latin Alternative Music Conference (LAMC) Battle of the Bands contest (previous winners include Kinky and Los Abandoned who have both gone on to launch successful careers) the duo caught the attention of Nacional Records. Pacha Massive's

Nova's Dominican roots exposed him to a lot of traditional music like palo in addition to music from England and the U.S. played on Dominican radio. His passion for music began early, and as a youth he began building instruments out of whatever he could find using cans for drums, 2 X 4's, rubber bands, etc. Nova recalls ?When I came to the U.S. I got my first instrument on my 15th birthday, a drum set, and as the years passed I picked up guitar, bass, keys, percussion and finally the instrument that allowed me to solidify my ideas in a flexible and efficient way?.a Mac.? Nova describes his musical influences not necessarily as musicians, but rather as people ?who have influenced me in the way I make music? citing Bruce Lee, Benjamin Franklin and Leonardo DaVinci as ?people who had a bigger perspective and were more holistic in their craft?.

Maya was born in Colombia and raised in NYC's Washington Heights. Her love of music also started at an early age with the violin and later became a career choice when she went to Cuba after graduating to study double bass. Her musical influences range from classical, salsa, bolero and traditional Colombian folklore to reggae, house and artists like Manu Chao, Hector Lavoe and Sidestepper.

If You Want It