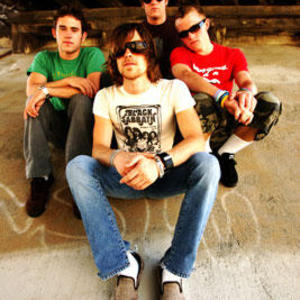 It seems logical to assume that in early 2001, when Chase Johnson, and the Hurley brothers, Kelan and Braeden, formed Stulpigeon (the bands previous name) as seventh and eighth grade kids, that the band was something they all loved. (Drummer Nick Gross joined the band a year later in 2002) Now, skipping to 2006, the band has taken that love of music and grown immensely along with a new name and a new sound that has evolved from Incubus and Foo Fighters covers at school, to the completion of their first unique independent record in April 2005.

With influences ranging from Rage Against the Machine, Muse, and Incubus to Led Zeppelin and The Doors, OPEN AIR STEREO has managed to take these influences and use them to create a hard-hitting, unique, and compelling sound followed by a captivating live show. Hitting venues multiple times such as The Galaxy Theatre, The Coach House, The Roxy Theatre, Chain Reaction, and KROQ's Weenie Roast 2005, ended up bringing them to the 2004 and 2005 Orange County Music Awards where they were honored to be placed in the top 12 high school bands in Orange County. OPEN AIR STEREO was nominated top five for Best Indie Rock Group in 2004, and in 2005, were nominated for Best Rock Group.

Their first self titled EP, released in April of 2005, began in August 2004 with producer matt Beckley of T.E.A. and engineer Greg Burns (American Idiot, Clapton). "It was something the band was all super excited about," says drummer Nick Gross. "It was our first CD and we're proud of it. It was an accomplishment for us from playing out of 12 inch high amps to having a fully produced album. We love all the songs to death and always will, but this year we're ready to move on. It's 2006 and we're starting fresh." And moving on is exactly what OPEN AIR STEREO is doing. Currently working on their 2nd debut CD with Beckley and other producers, which OAS now describes as..."Just plain kick ass", as well as finishing up filming for the third season of MTV's reality hit show "Laguna Beach: The Real OC", the boys are now busier than ever.

"I know we're all excited for the future and for this year. Its going to be a great year for us and we're ready to hit things full speed. We're not beating around the bush. We're getting ready to hit the world with a boom. It's OAS."