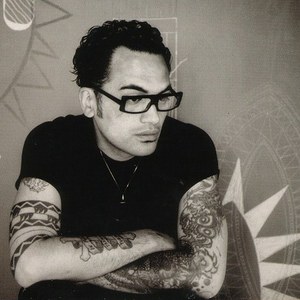 There are multiple artists with this name: 1. OMC (Otara Millionaires Club), a pop duo from New Zealand 2. OMC (One Man Crew), a trance musician from Israel 1) The Otara Millionaires Club were formed in 1993 by Phil Fuemana after his earlier bands, "Houseparty" and "Fuemana". His younger brother Pauly joined soon after and they recorded two tracks for producer Alan Jansson's Urban Pacifica collection Proud.

1)
The Otara Millionaires Club were formed in 1993 by Phil Fuemana after his earlier bands, "Houseparty" and "Fuemana". His younger brother Pauly joined soon after and they recorded two tracks for producer Alan Jansson's Urban Pacifica collection Proud.

After a falling out with his brother, Pauly Fuemana approached and Jansson and he suggested that Fuemana keep the initials as a name, and thereafter Fuemana and Jansson were, in effect, OMC. Whilst Fuemana fronted the project and took it around the world, the music was created by both of them. Fuemana was the frontman and played some of the original instrumentation. Jansson co-wrote all the tracks and arranged and produced the duo's albums. Sina Siapaia (stage name "Sina"or "Sister Sina") was the female backing vocalist on "How Bizarre" and other tracks on the debut album of the same title. [1]

How Bizarre (1995-1997)
Signed to Simon Grigg's huh! label, OMC released the single "How Bizarre" in New Zealand in late 1995. It was an immediate smash hit even without a video, reaching number one in early 1996 and staying there for three weeks. It sold over 35,000 copies (3? times platinum certification), a figure not exceeded in New Zealand. That same year, "How Bizarre" went to number one in Australia for five weeks, sold over 150,000 singles, and was certified as a platinum single. Later in the year the single went to number 5 in the UK and number one in countries across Europe and much of the rest of the world. It was followed by their debut album, also entitled How Bizarre. Their third single "On the Run" reached #56 on the UK singles charts in 1997.

In 1997 and 1998, "How Bizarre" spent 36 weeks on Billboard's Hot 100 Airplay chart, peaking at # 4. The song never charted on the regular Hot 100 as it was not released as a commercially available single there. It also became BMI certified million airplay song two years in a row. The album went on to sell in excess of a million copies in the United States alone, as well as charting in many other countries such as Switzerland. Between 1995 and 2000, OMC are estimated to have sold between three and four million records worldwide, and "How Bizarre is the biggest selling record ever to be released by an act originating from and recorded in New Zealand.

Follow-up success (1997-2002)
How Bizarre was followed by the singles "Land of Plenty" which reached the top 5 in the New Zealand charts, "Right On" which achieved platinum-status in New Zealand and "Right On" which was a minor international hit in the Netherlands and the United Kingdom. By 1998, Fuemana and Jansson had had a falling out over royalties, which ended up in court, but after a settlement, it was agreed Fuemana could continue to use the duo's acronym as a solo artist. [1]

In 2002, their song "How Bizarre" reached #71 on the 100 Greatest One-hit Wonders hosted by William Shatner.


2) One Man Crew is Liran Ran, Born in 1983, Haifa Israel.
Back then, when he was 5, he started to play piano and the romance with the music began.

At the age of 10, Liran was already ripe to start composing, from sketch to sketch he passed many music styles but the style that attracted him the most was trance.
At the age of 12, he performed as clarinet player in "The representative wind instrument orchestra".
After couple of years he decided to leave the orchestra and focused on being an independent composer and performer.

At the age of 14 he produced "double click" in Infected Mushroom studio.
The track sold to "Hommega Productions" and released in the trance compilation "Israel's Psychedelic Trance vol. 5" that sold over then 20,000 copies and was a big success all over the world charts.

After a while, he made several tracks, among them you will find "hard drop", "land of fantasy" and "keep your mind" with cosma (R.I.P).
For a while, he abandoned the trance music In Purpose to focus in creating music for theater plays, independent singers, radio station, and for computer and TV games.

Between the ends of 2005 to the middle of 2006, he was a part of the trance crew "Double Impact".
Already from their first released they became to be a huge success and performed all over Israel later on also in Europe, Brazil and Japan.

In 2007 , he's back again to his independent path sweeping after him a tsunami of fans with his incredible live shows making his way to the top, some says that he's already there.

These days Liran is totally focused on producing his own trance album. Many peoples have been waiting for a long time to O.M.C's album, soon their's waiting will be worthwhile.