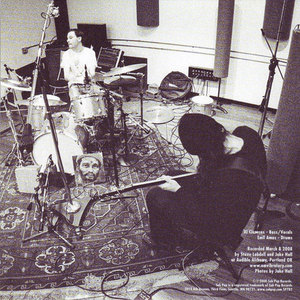 There are multiple artists with this name: 1. OM is a duo from San Francisco, California, United States, formed in 2003 by the rhythm section of the disbanded stoner metal band Sleep. The band's first three albums feature Al Cisneros on vocals and bass and Chris Hakius on drums. The band's music is similar in structure to Tibetan and Byzantine chant and is rich in rhythm and melody. Their music and lyrics lift off at the beginning and slowly mutate giving a feeling of evolution inside each song.

1. OM is a duo from San Francisco, California, United States, formed in 2003 by the rhythm section of the disbanded stoner metal band Sleep. The band's first three albums feature Al Cisneros on vocals and bass and Chris Hakius on drums.

The band's music is similar in structure to Tibetan and Byzantine chant and is rich in rhythm and melody. Their music and lyrics lift off at the beginning and slowly mutate giving a feeling of evolution inside each song. The vocals have a monotone quality, producing, on some tracks, a noticeable hypnotic effect of the sort that tends to be appealing to the devotees of the many various genres of druggishly-bent, "space" music - but which not all music calling itself stoner rock necessarily is able to cause.

On January 2008, Hakius left the band and was replaced by drummer Emil Amos, of Grails. OM have since released Gebel Barkal, a 7" for Sub Pop's Singles Club, a live vinyl-only LP titled Conference Live on Important Records, and on September 2009 their fourth full-length studio album God is Good was released by Drag City.

On May 2011 Drag City confirmed on their web site that the band were working on a new album which was released on July 2012. The album name is Advaitic Songs and was met with critical acclaim.

2. OM was a jazz rock band signed on the German ECM label in the 1970s. Formed in Lucerne, Switzerland, in 1972 and named after Coltrane's darkly convulsive album, the members of OM were initially inspired as much by the rock of Jimi Hendrix as by the new developments taking place in improvisation. "Electric jazz - free music" was their rallying cry, and they played it loudly. All in their early 20s when the group was launched, the members of OM achieved an early success at the Montreux Festival in 1974 which helped to put them on the map, and brought them to the attention of ECM.

Four albums were recorded for ECM's sister label Japo, between 1975 and 1980: Kirikuki; Rautionaha; Om with Dom um Ramao; and Cerberus. In jazz rock's heyday, OM was one of the few bands who were approaching jazz from a rock direction, rather than vice versa: most of fusion's traffic took the opposite route. The validity of their approach is borne out by this compilation, with material chosen by the band.

After OM broke up in 1982, its members continued to appear intermittently on ECM recordings, in combinations with each other and separately. Guitarist Doran, drummer Studer and bassist Burri all appeared on the album Musik f?r Zwei Kontrab?sse, Elektrische Gitarre und Schlagzeug. Doran and Studer were also part of the power trio Red Twist and Tuned Arrow, and Studer was also in Pierre Favre's Singing Drums collective, and Rainer Br&uuml;ninghaus's Continuum band with Markus Stockhausen. Saxophonist Urs Leimgruber has been away from ECM the longest - but also in his case there are some enduring connections: Urs today fronts a trio with bassist Barre Phillips and pianist Jacques Demierre, and plays regularly with Marilyn Crispell. He has become a major voice on the free improvisation scene. Indeed, all OM members have made their mark.

3. OM is the first Bulgarian ethno ambient band, formed by founder Nikolay Ivanov in 1991. The purpose is the creation of cross culture synthetic and plastic music, which is aiming to associate elements from the ethnic music, ambient, jazz, new age, and minimalism. Nikolai Ivanov realized his conviction about the synthesis of East and West ideas and the global "ethnologisation" of contemporary art. OM uses instruments and motives taken from the Balkan tradition: tambura, tarambuka, bagpipe, instruments from the East-sitar, tabla, ghatam, sas, specific Tibetian singing mixed with acoustic guitar, forte piano, bass and electronic instruments, programming and samples.

The group offers a lot of concerts and in many occasions takes part in most of the Bulgarian festivals: Saloon of the Arts; Apolonia; Varna Summer; August in Art; Sofia Jazz Peak; Music Jam; jazz festivals in the country and in Sofia. The musicians are aspiring to a maximum "opening" - they play in clubs with electronic ambience, in jazz and fusion clubs, ethno clubs and they make acoustic concerts and vanguard performances. OM and Nikolai Ivanov have made artistic tours in France, Germany, Hungary, Spain, Norway, Croatia, Poland, Austria, Turkey, India, Nepal, and China. On May 1996 OM together with musicians realized the highest concert in the world- at 5345 metres at Kalapatar (under Everest), which was registered in the files of Guinness. OM takes part as well in lots representative activities, like: concert Milenium (on invitation of the President of Republic) - author Nikolai Ivanov, concert at EXPO 2000 - Hanover, concert at the Congress center in New Delhi, etc.

4. OM was an early 1990s techno and trance music collaboration between Tetsu Inoue and Dennis Ferrer.

6. OM is an experimental rock band from Palermo, Italy, formed in 2002.

Conference Of The Birds

Variations On A Theme