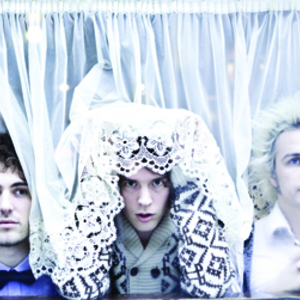 Oh No Ono was an experimental pop quintet formed in 2004 in Aalborg, Denmark. Their music, intricate and otherworldly, defies conventions and expectations (and sometimes gravity). The ten dense, hypertextured sour-sweet-sad opuses found on their US debut album, Eggs, are truly breathtaking to behold; the band creates bewitching pop symphonies that unfold themselves more with each successive listen. The band split in 2011.

Already stars in their home country of Denmark, Oh No Ono (which consists of Aske Zidore, Nicolai Koch, Kristoffer Rom, Malthe Fischer, and Nis Svoldg?rd) has capitalized on a wave of Scandinavian press, touring extensively, and receiving surprising amounts of radio and video airplay for a group so focused on an aesthetic of capriciousness and experimentation. After receiving the ?Breakthrough of the Year? award from the DR (the Danish equivalent of the BBC), the band jumped into the Scandinavian festival circuit, drawing the attention of, among others, NME, who said of the band: ?[T]hey sound like Devo sticking their fingers in a powersocket... at a helium balloon factory... on the moon."

But the members of Oh No Ono were always trying to attack something bigger. And Eggs, their US debut on Brooklyn-based Friendly Fire Recordings, is nothing if not bigger - it is nothing short of virtuosic. To record the album, the band locked themselves away in a small country house on the Danish isle of Mon for nine months. And yet Eggs is the anything but claustrophobic; reaching beyond traditional guitar/bass/drum textures, the band weaves myriad environmental sounds, samples, and nonstandard instrumentation into the mix. The sound of bird flocks taking flight are followed by woodwind players. Percussion is played on a water-filled tub. Elephants are heard, being elephants. A massive choir of Oh No Ono's friends sing along with the organ in a 300-year-old church.

Which is not to say the band spent all nine months cuddling trees and Pinking their Floyds. Like their contemporaries Animal Collective, the propulsive yet fundamentally beautiful pop Oh No Ono creates ties together all the ear games. Eggs' vivacious, even lusty approach to songcraft is the trademark of a band determined to approach pop music via the hard road, without ever losing track of the fact that they are creating pop music. From the shimmering textures of The Wave Ballet to the operatic splendor of Icicles, from the cacophonic underwater pop of Eleanor Speaks to the falsetto singalongs of The Tea Party, this is a band whose command of melody is superlative, and whose ability to channel and transform their myriad musical influences into something genuinely unique and entrancing is thrilling.

Other talented artists have begun to take notice of Oh No Ono - the packaging for Eggs, lovingly crafted by Malene Mathiasson, features embossed, egg-shaped artwork and a series of darkly sexual, mix-and-match paintings that would do Francis Bacon proud. And the aesthetically beautiful - albeit slightly disturbing - video for lead single Swim directed by rising Danish director Adam Hashemi, managed to top Pitchfork.tv's charts (Tobias Stretch, whose video credits include Radiohead's "Weird Fishes/Arpeggi," is already hard at work on a new video for the band). But ultimately it's the songs on the album - bizarre, melodic, catchy, beautiful - that make Oh No Ono shine. There are wonderful hatchlings waiting to emerge from Eggs.