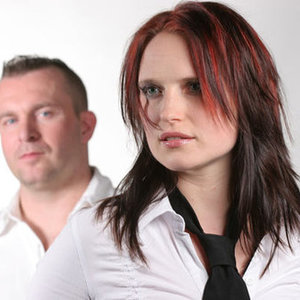 Obscyre/Obsc(y)re started their carreer in early 1996. As a complete unknown band their first success was the quotation as "newcomer of the year" by local, but well known and reputated, radio station "Energy". Meanwhile this german synth-pop three-piece made their way almost to the top, and they can look back to a wide selection of nationwide press feature, and handful of nation- and euopean tours, also supporting Blind Passengers, Prager Handgriff and DE/Vision amongst others.

Obsc(y)re are a band with the aim to create their very own sound, recognizable aswell as innovative. Female vocals (quite rare in their genre) change to distinctive male vocals, supported by most dance-able compositions. The songs are about love (good and bad), sadness but aswell about happiness and the pleasure of existance. Pop music without the bitter taste of "creation for cash". The album "REVIEW" is a collection of previous recordings, some are un-available these days, most of the tracks are remixed, or at least re-mastered. "REVIEW" is a milestone on their way to the top.