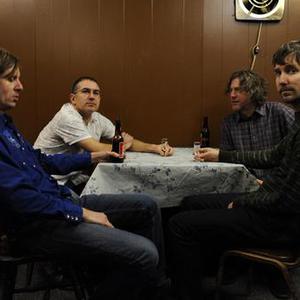 Every so often over the past few years you'd hear a whisper about this new Brooklyn band featuring a couple of indie rock veterans. Supposedly they'd been practicing since 2006, but weren't ready to play live yet. Then they finally did play and immediately a bootleg recording of that first show spread all over the web. In lieu of having anything recorded for people to hear, the band even put some of the songs on its MySpace page.

But little did Obits know how much the listening public was clamoring to hear more. With only the bootleg to go on, bloggers tried to fill in the blanks with comparisons both apt and not. They don't really sound that much like Creedence, maybe a little. Who knows what the people at Sub Pop were thinking, other than they wanted the band to join their roster post-haste?in July of 2008 they invited Obits to play their 20th anniversary bash in Seattle, months before the ink was even dry on any contract.

?Honestly, it was flattering, but it also seemed a little absurd,? says singer/guitarist Sohrab Habibion, formerly of Washington, D.C. indie greats Edsel. ?I had a comical image of people sitting around a conference table listening to a crappy live recording and going, ?Yeah! We're totally into THIS!' If that really is what happened, I wish we had a photograph of it.? Adds bassist Greg Simpson with a laugh, ?I think the crappiness made us sound better.?

At first, Habibion, singer/guitarist Rick Froberg and drummer Scott Gursky were toying around with a three-guitar incarnation, which ?was filling up the same tonal and melodic range,? Habibion says of the short-lived experiment. But once Simpson was brought?