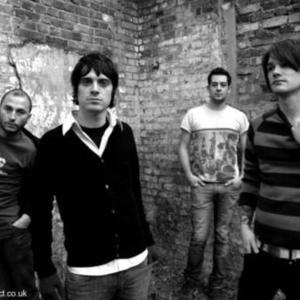 Nightmare of You is an indie rock band which formed in Long Island, New York, United States in 2004. They consist of Brandon Reilly (vocals, guitar), Joseph McCaffrey (guitar), Brandon Meyer (bass) and Michael Fleischmann (drums). Reilly is the former guitarist for the melodic hardcore band The Movielife. The group is heavily influenced by bands like The Smiths and The Cure. They have previously been nominated for mtvU Woodie awards for Best Tour and Most Downloaded.

They have previously been nominated for mtvU Woodie awards for Best Tour and Most Downloaded. They were also the winners of Yahoo! Music's "Who's Next?" competition for the month of April 2006, a competition that has the potential to propel the winners into mainstream prominence. Past winners include My Chemical Romance, Coheed and Cambria, and Hinder.

In 2005, Nightmare of You released their debut self-titled album. Before this, they released a demo in 2004 featuring 5 songs, only one of which was carried onto their debut album - with a changed title, lyrics and a slightly different melody. That song was Yuengling, but is known on the album as I Want to Be Buried in Your Backyard.

The recording of their new album - as yet untitled - began in early 2007 after they finished their second headlining tour of the UK, along with support acts The Cinematics and Circuits. The album was originally due to be released in Spring 2007 but later the date was pushed back to Autumn 2007, then to Spring 2008.

Nightmare of You stated on their official MySpace that they had left their first label, that which their self-titled debut was produced with, The Bevonshire Label. As yet they have not found a new label. This has contributed in part to the delay of the new album.

Later news from the band's website revealed that they were to put off a whole new album and instead began work on a follow-up release to their 2005 self-titled debut album. On September 11th 2007 Nightmare of You released a new EP, titled Bang. It featured five new tracks, previously unheard except in live shows, including "Bang" and "Herbal Jazz Cigarette".

The band scheduled a two-month tour as supports of Cartel that was to span from October through to November, over fifty shows. However, Nightmare of You had to pull out at the last minute due to an undisclosed health problem within the band. Instead they played an introductory gig for their new EP in America, and later went on to play a few select gigs in the UK, for the second time in less than a year.

Meanwhile Nightmare of You covered a Flaming Lips track on the recent Sound of Superman soundtrack. The track, called Waitin' For A Superman, appears as track number 11 on the album.

In mid-February 2008, Sammy Siegler (ex-Rival Schools, ex-CIV, ex-Glassjaw) left Nightmare of You to start a family with his wife. He was replaced by Michael (Mike) Fleischmann, but his departure was not a sorry one. He simply felt that he couldn't carry on touring as well as being a father. His first child is due in September.

From May to June '08 the band took part in a full tour of the United States as part of their "Bang Tour" (along with The Graduate, Paper Rival and Edison Glass). Just before the tour, Nightmare of You signed up to the website "Twitter", and regularly posted updates during their travels, one of which included the phrase "We are going to finish writing our new album now", which has led fans to believe a new album is in the makings. Indeed, on the 27th June 2008, it was confirmed that the band had written twelve new tracks and were still drafting more for their upcoming LP.

On June 21st '08 the band leaked their first demo for the new album, "I Think I'm Getting Older", onto their myspace page. This was replaced a week later by another demo, "Someday, But Not Today". They are looking to continue this replacement process over the next few weeks, slowly leaking new music to the public. Another demo was released on their Myspace page in November.

The names of demos are (in order of release): "I Think I'm Getting Older", "Someday, But Not Today", "Tell Me When It's Over", "Hey Sweetheart" (released solely on their OurStage profile), "Eustacia Vye" and "Long Island".

At the end of August/start of September 2008, Nightmare of You released a new music video for a track off their EP, "I Was Never A Normal Boy". Unlike the other videos, this one did not have a focus on the band.

In October 2008, the band released a split 7" vinyl with This Is Hell. Two previously "unreleased" tracks (unofficially released to the public) appear on the disc, "You Don't Have To Tell Me I Was A Terrible Man" and "Dopesick Couples". Whilst this split has been labelled as a strange mix, there is reasoning: Brandon Reilly's brother Travis is in This is Hell.

November 2008 saw the release of their limited edition vinyl. The first 200 copies sold were signed. Each had slipcases with all-new artwork, and the records themselves contained the entirety of the band's discography - not including tracks that were on the split 7" or those that were released this year as demos.

On the 2nd of January 2009, the group began the recording for their new studio album. It was recorded in Soho, New York.

February 2009 saw the departure of another well-loved member of the band, Ryan Heil (bass). The decision came after discussions regarding the band's future; whilst most members wanted to go on an extensive touring session, Ryan felt it wasn't right for him. He was replaced by Brandon Meyer.

Their newest album was released on August 4th 2009, titled "Infomaniac". The title was originally leaked through a teaser on their MySpace profile and first confirmed at a show they played in the UK during their tour in April. Infomaniac was released on separate dates in online stores such as iTunes from the official store releases. To celebrate the release of their new album Nightmare of You played a number of free shows.

In August 2011, for the first time in a long time, Brandon Reilly posted a blog entry outlining the band's plans to start recording tracks again in the near future. The exact line up of "Nightmare of You 2.0" is at this time unknown: only Brandon and Joe remain as permanent members of the band.