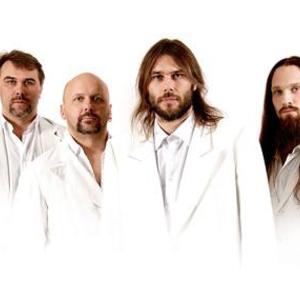 There are three artists with the name Nightingale. Artist #1: Nightingale began in 1995 as a solo goth rock project of Dan Swan?, designed to explore his brief fascination with the genre, also evident on Edge of Sanity tracks such as "Sacrificed". The first album The Breathing Shadow was recorded and mastered by Swan? alone in the space of a week at his home Unisound studio. The second album The Closing Chronicles was recorded in April 1996 with his brother Tom Nouga (real name Dag Swan?) acting as producer and contributing some guitar parts.

Artist #1: Nightingale began in 1995 as a solo goth rock project of Dan Swan?, designed to explore his brief fascination with the genre, also evident on Edge of Sanity tracks such as "Sacrificed". The first album The Breathing Shadow was recorded and mastered by Swan? alone in the space of a week at his home Unisound studio.

The second album The Closing Chronicles was recorded in April 1996 with his brother Tom Nouga (real name Dag Swan?) acting as producer and contributing some guitar parts. It continues the conceptual storyline that began in The Breathing Shadow to the logical conclusion of the central characters death, as it was intended to be the last Nightingale album.

After this the band went on semi-hiatus, playing a couple of live concerts in small venues around Orebro with future permanent band member Erik Oskarsson on bass and Ari Halinoja playing the drums. The second concert, in October 1998 is remarkable because it marks one of the few times Edge of Sanity songs were performed live by Swan?, the band adding two lighter tracks to bulk out their set (Swan? scarcely performed live with Edge of Sanity, citing his inability to sustain death metal vocals for long enough).

The band returned to Unisound in April 1999 to expand upon a lost demo of the track 'I Return' recorded by Swan? and Nouga in September 1998. 2000's I is a prequel to the first two albums, half composed by Dan Swano and half by Tom Nouga, several of the tracks, such as Alonely and Dead or Alive being recycled by Nouga from previously abandoned projects and given new lyrics (the originals being both written in Swedish and outside the conceptual storyline).

For the recording of Alive Again in may 2002 (a sequel to the original "Breathing Shadow Trilogy" of I, The Breathing Shadow and The Closing Chronicles) the band was filled out with Tom Bj?rn on drums and Erik Oskarsson returning as a permanent member. This record received the most critical acclaim yet upon its release in February 2003, partly owing to the increased exposure caused by their signing of a distribution deal with American label The End Records, and saw them play a string of live shows before travelling to V?ster?s in June 2004 to record Invisible, which is the band's first departure from their conceptual storyline approach, dealing with a wide array of topics from love to history. The band are currently preparing for their first major tour, after re-recording a set of tracks for a best-of album, Nightfall Overture, containing songs from their first four conceptual albums as well as an Edge of Sanity track and one new Nightingale song.

In 2006 the band had the honour to conclude the second and last day of the international progressive rock festival, InProg 2006. Later that year Dag stated on his website that he will no longer be using his alias Tom Nouga;

The band's latest album is White Darkness and it was released 4th of June, 2007.

Artist #2:Nightingale was formed in 1993 by Jeremiah McLane (accordion, piano), Keith Murphy (voice, guitar, mandolin, piano, foot percussion), and Becky Tracy (fiddle). The nightingale bird is a poetic figure that appears in traditional songs from many places including parts of Northern Europe, Canada and the United States. So the nightingale was an appropriate emblem for a band commited to drawing inspiration from a wide musical territory that includes Ireland, France, Scandinavia, Newfoundland and Quebec.

The band's first recording, The Coming Dawn was made in 1994, barely a year after the band's formation. It was produced by Pete Sutherland and it captured the fresh, raw energy of the band as well as establishing Nightingale's sophistication as players and arrangers of an eclectic mix of traditional music.

Less than two years later, the band took on a more ambitious recording project - Sometimes When the Moon is High, produced by Grey Larsen. The album was recorded in Joliette Quebec at the (just newly finished) studio of La Bottine Souriante pianist, Denis Frechette. More musically complex and more tightly arranged, this album won the band cudos from a wider audience.

Throughout this period, Nightingale travelled extensively playing concerts and dance events around the U.S. and also in Canada, the U.K., France and Denmark.

Nightingale's most recent recording - Three , released in June 2004. The CD was produced by Denis Frechette and recorded in Brattleboro, VT. It reflects Nightingale's past while also breaking new ground.

Artist #3: Nightingale, formed in 2003, is a project of Gaspard De La Nuit (Caspar Wijnberg, who stands for the 'night' in the band), singer Abigael Klumperbeek (that would be the "gale") and Eelco van Zanten. Their debutalbum "For a change" is recorded in Wijnberg and Bas Bron (Bastian) their studio in Amsterdam. The music consists of melodic funkpop, comparable to Bastian.

Sometimes When the Moon is High