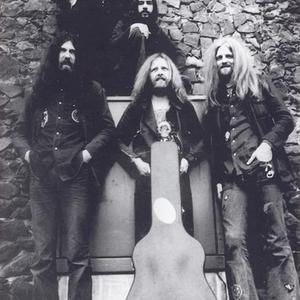 NEKTAR is probably the most German-like of the Seventies British bands, a fame that owes a lot to the town in which this band was founded (Hamburg) and to their stylistic approach (Assimilated to Krautrock). NEKTAR was formed in 1969 by Allan FREEMAN (keyboards & vocals), Roye Albrighton (guitars & vocals), Derek MOORE (bass, Mellotron & vocals) and Ron HOWDEN (drums). Their earliest albums were hard rock that drew heavily from the space-rock and PINK FLOYD styles of the same period.

Their earliest albums were hard rock that drew heavily from the space-rock and PINK FLOYD styles of the same period. The 70's gave them the occasion to issue some masterpieces, like for example "A Tab in the Ocean (1972) "Remember the Future" (1973) and "Recycled" (1975). Each is a conceptual album that is a nice blend of melodic guitar and keyboards with a vocal story. "Journey To The Centre Of The Eye" is a mindblowing epic with lots of echoplex guitar and dual Mellotrons which is quite in tune with the Krautrock stuff going on around them, yet is definitely British. "Magic is a Child" had shorter songs and were less less satisfying.

Nektar's entire back catalogue has been re-vamped and reclad and is about to be re-issued in the USA, supported by a tour. A new Studio CD "Book of Days" is targeted for 20th March 2007 release on EMI - Caroline.

The band has recently been joined for their upcoming tour by the bass player Peter PICHL (Running Wild and other bands).

Nektar have their own thriving website and community located at http://www.nektarsmusic.com

A Spoonful Of Time