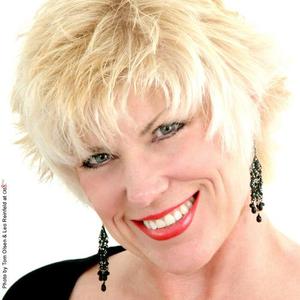 Singer Nancy Kelly is one of only a handful of real jazz singers who truly embody the sometimes forgotten art of true jazz singing Nancy Kelly's vocal style is a study in phrasing, style and swing. She's both old school and new. She's experienced, yet her delivery and ideas are fresh. She can take a song and turn it up or down, and leave you believing that it was meant to be exactly that way. It takes great jazz chops to do that, and Kelly's are superb. She has earned many awards and enlisted fans from around the globe.

She began her musical career at age four in her hometown of Rochester, New York, with piano lessons. She continued her music studies to include clarinet, drama and dance. When she enrolled at the Eastman School of Music, she decided to concentrate on voice.
At sixteen, she formed a combo and performed at clubs around Rochester. In the early 70s, she joined a rock band as lead singer and went on tour of the East Coast and the Midwest. Enjoying the freedom to improvise, she gravitated to jazz, forming her own group.
As a jazz artist, she's performed on the West Coast, in the Far East and Europe. She performs regularly in New York City at the most prestigious clubs: The Blue Note, Birdland, and Dizzy's Coca Cola club at Lincoln Center. She has appeared at numerous jazz festivals and has sung with various symphony orchestras around the country.
Nancy was twice named ?Best Female Jazz Vocalist? in the Down Beat Readers' Poll.
She has recorded four CDs, the most recent being ?Well Alright" with guest tenor saxophonist Houston Person.

Nancy Kelly continues to dazzle audiences with her take-no-prisoners, back-to-the-roots swinging style.
In a market place where wispy voices and shallow emotions abound, Ms. Kelly is a breath of fresh air?or should we say, smoky air; she takes us back to the time when jazz ? and that includes vocal jazz -- was an authentic expression of real emotion.